The first piece of merchandise we ever made was a bumper sticker that proclaimed “Shiver me Fuckin’ Timbers It’s Captain Tractor!” Twenty-five years on, this very first statement of ourselves still pretty much sums up what Captain Tractor was, is, and will be long past whenever our time is up.

We just wanted to have a party every night, and so we played our folk/rock music because it was fun, everyone loved it, and we could bring the house down each and every night wherever we were in Alberta. Soon, we were having that party every night from coast to coast and far abroad. We wrote, recorded and travelled the planet, always on tour, always searching for the party, always independent.

We crowd funded our albums (before crowd funding existed) worked out of a small office with a handful of paid and volunteer staff, had the first band website in Edmonton, made the first interactive band CDROM in Alberta, and won a few awards along the way.

Some faces in the band have changed, as parties tend to do, and in 2005 for the release of our seventh album, North of the Yellowhead. we partnered with Edmonton’s Alley Kat Brewery to make Captain Tractor Yellowhead Wheat Ale, which was on tap in many bars and pubs in Edmonton and around Alberta. That was a great summer.

The next few years saw the release of Famous Last Words, Live at the Roxy, and appearances at Folk Festival stages around western Canada, most recently at the 2018 Rainmaker Festival with Kim Mitchell and Bif Naked.

So, nine albums later (plus a five album box set of unreleased and live music), here we are, 25 years on. Whew. To keep the party going, and commemorate the occasion, we are releasing a double vinyl album retrospective, including a few new songs. 25 Years On is a completely re-mastered retrospective with four new tracks recorded in February 2018 with Nik Kozub at The Audio Department in Edmonton, two unreleased tracks from the vaults, and seventeen past tracks spanning our first album Land, to 2015’s Live at the Roxy. Never ones to go half way, we have also partnered with Hansen Distillery, who is making us a special Twenty-Fifth Anniversary Limited Edition Captain Tractor Spiced Rye Whiskey.

See you out there. Peace.

North Of The Yellowhead 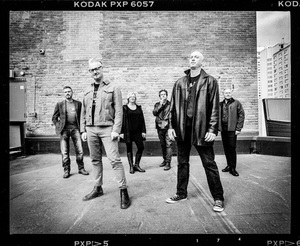