David Campbell: A keeper of the fire
In the geography of Guyana's music, Kabakaburi is part of a very special region. It has a distinctive music created by our Arawak and Spanish heritages.

This is the place of the mari mari, the crapaud dance, and the round dance - accompanied by violin, mandolin, quatro, and shak-shak.

David Campbell has immortalized this region in the song Kabakaburi Children, for me one of the most lyrical and poetic songs from the Guyanese song book. This song was recorded in the UK and released on the LP Sun Wheel. Through Kabakaburi Children, with its mari mari rhythm, Campbell tells the story about changing seasons and colonial invasions. He calls on the people never to forget their cultural heritage - a call that all Guyanese should heed today.

These themes of justice, harmony with nature, and pride resonate throughout his impressive body of work. Campbell has "written over 1600 songs about a wide variety of human subjects, including Native People of the Americas, Immigrant People, The Earth, World Peace, Children, Man/Woman, and the Journey to Health and Wholeness."

Campbell, the son of Steven and Umbelita Campbell (nee Da Silva), was born in the Pomeroon. His father, an Arawak, was a trail-blazing politician who fought for Amerindian land rights. A fight that is still not yet resolved.

The creative arts were part of the family of eight siblings.

His sister, the late Stephanie Correia, was a nationally and internationally acclaimed artist and potter. His father played the violin and the accordion. "His mother, who was Portuguese, encouraged him and his siblings to sing harmonies together, and with her beautiful voice, passed on to him the deep feeling found in Portuguese fados."

He prefers to use terms like 'organic' and 'vocation' to describe his body of work which includes, in addition to the 1600 songs, more than 20 albums of his songs, 5 books of poetry and song lyrics, and many paintings.

Campbell was educated in Guyana, at Martindale RC School, on the Pomeroon River, and St Stanislaus College.

He migrated during the early 1960's to Canada. After about three years, he went to the UK, where he started his professional musical journey.

It all started at a folk concert at the Royal Albert Hall. An executive of Transatlantic Records, "the UK's pioneering folk label," heard his performance and offered him a contract. This led to several albums and the start of a television career.

Among the albums recorded during this period were: David Campbell (1969) and Youngblood (circa late 1960s) with Transatlantic, Mr Everywhere (1969) and Sun Wheel (1972) with Decca.

One of his first song-writing commissions was for a BBC song documentary series, The Camera and the Song. These songs were recorded, with him singing, accompanied by excellent Caribbean musicians, such as Sterling Bettancourt and Russ Henderson. Campbell has released this music on the CD Immigrant Songs - UK.

An examination of the lyrics of the songs produced during this era reveal a stance that challenges bigotry and dehumanization. It is in this period that Kabakaburi Children was recorded. His music during this period represents a fusion of many influences, including mari mari and calypso.

After three years in the UK, Campbell returned to Canada and settled in Toronto. Here he worked with Native Americans and focused on the challenges they faced across the Americas. He used poetry and music in this project. He released in the early 1970s, the LP Through Arawak Eyes. His poems on the same theme are published in the seminal collection Canada in Us Now.

His No, Not Columbus, from Through Arawak Eyes, became an anthem and was quoted across Native American communities. It was mentioned in 1997 by Chief Peter Guanikeyu Torres, Council Elder of Southern Jersey Taino Tribe of Jatibonuco.

David Campbell now lives in Vancouver, Canada, and has an active life as a singer, writer, television performer and painter. He has written several books of poetry. He has also written about philosophy.

His television work focuses on children, and he has been a regular guest on Canada's Mr Dress Up.

Campbell believes that priority must be given to working with children. The first song he wrote was inspired by the children of the Civil Rights era and was titled Skippin' and Jumpin'.

Campbell started painting in 1994 and has established a reputation for his use of colour and his manifestations of his Arawak heritage. His art graces the covers of his CDs.

Campbell's work has attracted many awards. He has received many commissions from the Canadian government to produce music for the education of Canadian children.

He has developed a loyal international following across races and nationalities. Dr Georges E Sioui, President of the Institute of Indigenous Studies, Canada, wrote:

"...let's listen together to this and other works of a great contemporary Canadian artist, thinker and humanist, our brother David Campbell, an old Arawak soul, speaking and singing to us about how to find, know and honour, the marvellous and powerful being that is in all of us."

David Campbell is the living embodiment of the power of the muses that come from a special place in the geography of Guyana's music. He is an expert wordsmith and clearly one of Guyana's most important lyricists. His ability to draw upon multiple landscapes makes him an inclusive and integrating spirit.

David has been an important ambassador and is a cultural hero. For his inspirational work, he was awarded a Wordsworth McAndrew Award by the Guyana Folk Festival Committee in 2003.

Underneath the Blue Canadian Sky

Underneath the Blue Canadian Sky

Through the Eyes of a Child 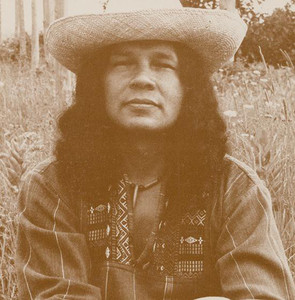