Formed in 1981 within a basement in East York, Toronto, the original four members began writing in the darkest hours. That line up consisted of Jonathan Strayer, Hugh Gladish and John Shirreff. Their first drummer, Ken Jones, camped out in the driveway in his van.

Within six months of forming, they had enough material to do warmup sets for bands like Men Of Song, Khroma-Key and Blue Peter. Having made significant noise in the Toronto alternative music scene, they were quickly gaining popularity in the College and University circuits. John Shirreff came up with the name after several gigs were played without one. In 1982, they came up with a small amount of money to get into the studio to record a 4-song self titled EP which was very well received by the college/university radio circuit.

The band's rehearsal space eventually moved into a dilapitated warehouse next to the Don River in the lower east end of Toronto, conveniently across the street from a beer store. Within those cold walls, they continued writing and were soon back in the studio recording the 12" EP "Reunion/Slaughter" [1983]. Local alternative radio station CFNY playlisted "Reunion" and their fan base quickly multiplied. About this time, they replaced the original drummer with ex-Kinetic Ideals member, Jonathan Davies [pictured].

A few years later they were back in the studio recording an album titled "Tales Of Adventure" [1986] of which the song "Happy Now I Know" quickly became a big hit and made some commercial headway. A third drummer, Kevin Hunter, had become a permanent member and they were now filling nightclubs on a regular basis. The Gary's took an interest and offered them opening slots for acts like Bauhaus, The Stranglers and Echo & The Bunnymen. Videos were shot for the songs "This Time Tomorrow" and "Happy Now I Know" and given regular rotation on MuchMusic.

Late in 1986, there was a short disruption as their bass player left and the remaining members called a time out. Within a few months, a new line up was put together with original singer John and guitarist Hugh, along with a new bass player Gary Quinn and second guitarist Chris Wardman. The third drummer, Kevin Hunter also remained with the new line up. They were soon back in the studio recording their second album "Obscurity & Flair", with Chris and Gary contributing heavily in the writing. A third video "Ceremony Of Love" was shot on a lower budget, resulting in less airplay but they continued to play the night club circuit in Ontario and Quebec with a strong following.

Sometime in the early 1990's, John and Hugh made a decision to bury the project.

They made an appearance at Lee's Palace 15 Year Anniversary, performing just four songs with both bass players and special appearances by Maria Del Mar (National Velvet) and Kirsti Alley, who was in town working on a movie and chaffeured around town by BG's Gary Quinn at the time. Unfortunately, we lost Gary Quinn in April 2009 due to an undisclosed illness.

The three original members, (John, Jonathan and Hugh) have been throwing around the idea of a reunion although no definite announcement has been made.

Breeding Ground was formed in Toronto in 1981 and subscribed to the cold wave mould of acts like New Order's school of rhythm. Their first release was an untitled 4 song 12" EP in 1982 on Mannequin Records and featured original drummer Ken Jones.

They would receive notoriety with the independent 12" single "Reunion"/"Slaughter" in 1983 on Fringe. It was quite successful at college radio stations and ended up selling out three pressings.

The follow-up LP, 1986's 'Tales Of Adventure', was produced by ex-Blue Peter guitarist Chris Wardman (who later joined the band for a short period) enlisting the help of Alta Moda singer Molly Johnson and Jason Sniderman on keyboards. The record made it to No.1 on the campus charts and No.60 on CFNY's "Best 86 of '86" based on the success of the single and video for "Happy Now I Know".

Sometime after the release of the LP, bassist Jonathan Strayer left and they effectively disbanded. However, Wardman and Shirreff continued writing material in Wardman's basement along with bassist Gary Quinn and before long, the remainder of Breeding Ground was recruited back for the 1987 line-up of Shirreff, Gladish, Quinn, Hunter and Wardman.

Bites began coming to the band from major labels but, alas, lawyer hassles prevented a deal from ever being struck even though another album had been recorded. Two years passed before Breeding Ground's next release, "Obscurity And Flair" which once again featured Molly Johnson and Chalk Circle's Tad Winklarz adding saxophone.

Chris Wardman and John Shirreff's version of David Essex's "Rock On" has never been released due to the flooding of the market with cover versions by Michael Damien, Bambi and The Dave Howard Singers. Wardman claims that their version of the song, played by disc jockeys on a lark at the Silver Crown Tavern, was lifted by the members of Bambi who also frequented the club.
John and Hugh (the only two original members) made a decision to end the project for good in the early months of 1990.

A compilation CD entitled "Revisited" was put together posthumously by John, Hugh and Kevin Hunter and released in 1994, again on Fringe Product. 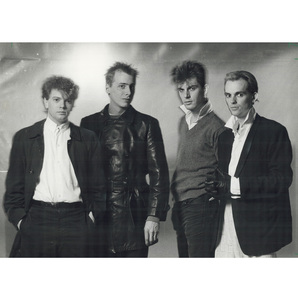