“So the first time that I heard Annihilator, I think it was 1989 and me and Nick Menza and Marty Friedman would listen to the Alice In Hell record, driving to and from rehearsal, all the time… cause we were basically writing the Rust In Peace record; we’d listen to it all the time. Jeff’s guitar playing was incredible. Annihilator really is Canada’s thrash band; kind of an extension of the Big Four. We have Sepultura in the South, we have Annihilator to the North. One of the pack, one of the tribe. I love Jeff, I love the band, I love his playing. His compositions are terrific and Alice In Hell was a dear record to me, still is.. I love to listen to it every chance I get. Annihilator rules.”
-David Ellefson (Megadeth)

The band is called “ANNIHILATOR” and is led by founding member Jeff Waters. Formed in 1984, the band has released 17 studio cd’s and numerous other live and DVD offerings. Waters is the guitarist, vocalist, studio bassist & writer for Annihilator as well as a studio owner, producer, engineer and mix & mastering engineer. Killer live shows, lots of touring since 1989 and pure, honest Heavy Metal-meets-Thrash Metal music.

Set the World on Fire

Welcome to Your Death

Set the World on Fire

King of the Kill

Criteria for a Black Widow

Two from the Vault (2CD) 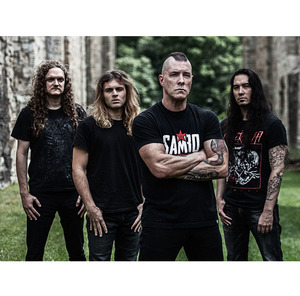