Randy Thompson
Born in Denver Colorado, Randy was one of the founding members of Alpha Centauri, and remained in the band for their entire 12 year run. Keyboard player, lead vocalist, songwriter, Randy’s talent always came through even though he was surrounded by a mountain of keyboards. After the breakup in 1983, Randy continued performing with drummer Kurt Smith in another Colorado band called “Eyez” After the breakup of “Eyez” Randy ended his career as a full time musician, and began perusing a career in electronics. Randy still resides in Greeley, and is employed as an electrical engineer for an international electronics manufacturer.

Garth Hannum
Born in Fargo, North Dakota, Garth grew up in Wyoming, where he began playing in bands in 1969. After majoring in advertising in college, Garth worked in several photography studios in Phoenix and Minneapolis, before joining Alpha Centauri. Bass player and songwriter, Garth proved that bass players didn't have to stand in the background, and was a vital part of the energy that the band projected. He resides in Texas where he is Sr. Videographer and Photographer for a large international company.

Kurt Smith
A native son of Greeley, Kurt began playing drums at the of twelve. As one of the founding members, he played with Alpha Centauri for over 10 years, and continued to play in various bands after the break-up. Kurt laid down a “thunderous” drum beat that was another reason the band had such a hard driving rock sound. Kurt has maintained a successful business in Greeley, where he continues to live with family.

Jess Redmon
Jess was another early starter, picking up the guitar at age seven. Jess joined Alpha Centauri in 1971 and stayed with them, for the most part until the end in 1983. Jess was a quintessential Hard Rock Guitar player and a driving force that helped captivate audiences, where ever Alpha Centauri played. After the band broke up, Jess started his own recording studio and label called Blue Zephyr. In 1988 he received the “Best Songwriter of the Year” award from the C.S.W.A. The most musically active member of the Alpha alumni, Jess lives in Pierce, Colorado with his family. 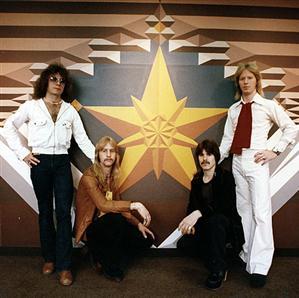