Canadian AOR band which released two albums: “Affairs In Babylon” (1985.) and “Burning From The Inside Out” (1987). REFUGEE, the brainchild of Canadian songwriter / vocalist Myles Hunter, released "Affairs In Babylon" in 1985 after an initial indie release under the moniker MICHAEL FURY. Drummer from this band Brian J. Doerner, from Kitchener, Ontario, Canada, is a former drummer of progressive rock band Saga, and hard rock band My Wicked Twin with his twin brother Brent Doerner. Brian has been playing music together with his brother since they were 8 years old.Brent was given a drum kit by their parents, which Brian took from him. Brian has been playing drums since that time. Brian Doerner also has a longstanding history with the Canadian rock band Helix, joining them twice. Brian has been recognized as "one of Canada's top drummers. Myles Hunter (ex Avalon Canada), bassist Martyn Jones and guitarist Rob Kennedy founded MICHAEL FURY (named after a character in James Joyce's short story, "The Dead") in 1979.They did the predictable round of club gigs throughout Canada until split up in 1983.Hunter met keyboard wiz Howard Helm (ex Zon) one year later and start to play with him the songs he has been written. Together decided to call Kennedy and Jones back, and with the addition of drummer Dave Mihal reform MICHAEL FURY. An initial demo was picked up by a local small label and the result is "Affairs In Babylon", released in 1984. MICHAEL FURY toured constantly throughout the country, but they began getting an identity crisis as people mistook the group name 'Michael Fury' for Myles Hunter himself. To compound matters the label tried to push the band as a solo act. This didn't sit well to the group (Hunter included), then a major US label offers a deal to the band and they bought back the rights to the album and signed a new contract. The disc was re-mixed and re-recorded for the most part, and modified with new songs, "Affairs In Babylon" was re-issued under the band name REFUGEE, with new drummer Brian Doerner (Helix). As REFUGEE, Hunter & Co. released another album in 1987; "Burning From The Inside Out". Both REFUGEE releases are considered classic '80s AOR gems by the fans of the genre.

Burning From The Inside Out

Burning From The Inside Out 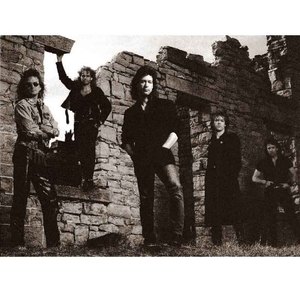