In late 1969, four young men from the suburban Montreal borough of Lachine gathered together at the UNF (УНО) hall just to see, and hear, if any magic could happen when they started to play. The boys had never played together as a group, but the drummer's father had asked his son to assemble a band for a New Year's dance he was planning for a new restaurant where he was a co-owner. As soon as Stefan, Andrij, Yurko and Ewhen began practicing, they knew they had something special - their harmonizing voices, plus the arrangement of the instruments, quickly gelled, and a new band was born!

Rushnychok became one of the first Ukrainian combos to perform at zabavas and banquets in a "rock band" style, therefore, many people refered to them as the "Ukrainian Beatles". Previously, zabava bands were primarily fronted by violin, tsymbaly, accordion, and other acoustic instruments, and performed mostly instrumental pieces. Rushnychok was a musical ensemble featuring several male voices up front, singing in harmony, and accompanied by electric lead & bass guitars, drums & percussion, and amplified accordion.

Together, the guitars and drums created a modern, driving, rhythmic sound, while the accordion preserved the link to the traditional past. The accordion also played the primary role in dance pieces such as fox trots, polkas, rhumbas, tangos & waltzes and, especially in, Ukrainian dances such as hopaks and kolomeykas. Rushnychok was fortunate to have three unique, lead singing voices that allowed them to perform songs with different tone colours, textures and dynamics. During a zabava, they perfected a formula by performing songs that would progressively build up on the tempo and dynamics, thus creating a rush of excitement in the dancing audience. For Ukrainian dance numbers, such as the kolomeyka, offbeat rhythms and percussive hits punctuated the melody in sync with dancers' moves.

For the more contemporary pieces that Rushnychok played in the Anglo-American pop or rock style, the guitars and percussion would come up front and dominate, however, the singers still sang in harmonies that were reminiscent of traditional Ukrainian forms. Rushnychok's contemporary Rock and Roll influences included: The Beach Boys, The Beatles, and The Rolling Stones. The major influences on the band from the Ukrainian music community are often cited as: Winnipeg's D-Drifter 5, and Montreal's own Sheremeta Band.

From the beginning, the members of Rushnychok took pride in their musical arrangements, their musicianship, their tight vocal style, and their colourful stage presentation - the band almost always appeared wearing full Ukrainian folk costumes. The decision to dress in embroidered Ukrainian clothing and adopt a band name full of Ukrainian symbolism was a big move during the 1960s & '70s, when most Ukrainian immigrants were still reluctant to display their ancestral heritage in their new, adopted home country. As a result, in the early 1970s, word quickly spread about the band, their popularity grew, and they were soon invited to play at significant Ukrainian events. When an invitation came, in 1972, to appear at the very popular Soyuzivka Resort in New York state, Rushnychok knew that they had "arrived." By 1974, they were playing at the resort up to five times a year woven between other key festival dates!

Without question, Rushnychok set a new standard with their pioneering style and also set new marks for all zabava bands that followed. 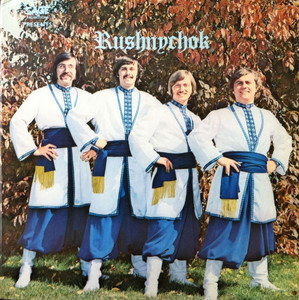