Robbie Rox was born in Timmins, Ontario and educated in Toronto at York University, was destined to be a creative performer.

Dressed in pyjamas, Robbie Rox's career started in 1970, in Rimouski, Quebec, with an acoustic guitar and two very different thirty minute shows. These acts saw Robbie warming up some of the big name American acts such as Gentle Giant and Mitch Ryder & The Detroit Wheels.

In 1973 he returned to Toronto and continued the same show with his lifetime friend and fellow musician John Hobbs. A few rehearsals later with Robbie singing and playing acoustic guitar, accompanied by John (also on acoustic guitar), they decided they needed to form a band for a more interesting sound. This led to the first Robbie Rox band. The band rented a house in Toronto's west end and rehearsed for their first demo tape recording. With the assistance of Brian Guy who introduced the Robbie Rox Band to HP & Bell.

The Robbie Rox band was booked professionally for the first time in 1974, at the Legendary Yonge Station at Yonge and Bloor, where musicians of all sorts came to check out the new bands. H. P & Bell then sent the Robbie Rox band on a road trip that fall, starting in Thunder Bay and ending up in Edmonton, Alberta. The band continued touring and went on an Eastern tour in 1975, covering New Brunswick to PEI. After the eastern tour the band was dissolved.

After some careful consideration and collaboration, Robbie started his first Horn Band in the summer of 1975. This band played for three years performing at legendary clubs around Toronto, such as The El Mocambo, The Colonial, The Midwich Cuckoo and Larry's Hideaway.

In 1978, the now "Glabrous Headed Rox" accompanied by this band released his first LP entitled Construction Site. In 1978 Robbie also started the Catso, Porco, Rozzo Band. This band performed many times at The Edge (originally Edgertons). Then in 1979, released an LP called RAW. A year later Robbie was signed by Quality Records. Robbie and the same band would record an LP called Do What I Do on the Quality Records Label.

Robbie formed another band in 1981 and released an E.P. called Man Need Woman, (an extended play, with 4 tunes). This band was reorganized after one year and with some of the same musicians released another Robbie Rox recording in 1982 called "Ghost Culture."

In 1984 Robbie formed "Robbie Rox and The Monster Horn Band." This band delighted and entertained the crowds for three years playing in and around Toronto at such venues as The El Mocambo, The Horseshoe, Larry's Hideaway, and The Diamond (now The Phoenix).

Born from an idea and the grouping of songs & compositions that followed a theme, together with arranger Jeff Goodspeed, Robbie ventured into a musical called "Ever Been to Sea Billy". The show was well received and played at The Phoenix in Toronto.

Robbie then reconstituted the band and called it CAZZOTTO. This band continued to perform around Toronto for a number of years.

Then in the early 90's, Robbie, using some of the same musicians from his very first band from the seventies, started The Rude Band. This band was basically a rock version for the Robbie Rox creative mind and material.

The Rude Band remained intact for 10 years and has recorded two CDs called Once The Head's Blown Off and The Big Screw.

Robbie is now setting his sights on the Australian and European markets as there are radio stations down under and across the pond, already playing and hyping cuts from the new CD. 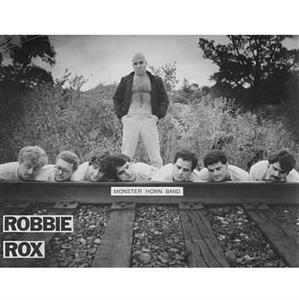