Imaginary Cities was born in a Winnipeg club called The Cavern, in between sets. This new group, founded in a chance meeting, is fast becoming one of the world’s brightest new bands.

It was Marti Sarbit’s voice that immediately captured multi-instrumentalist and songwriter Rusty Matyas’s attention at the Cavern, a Winnipeg bar where Sarbit was fronting a Motown cover band and Matyas had come to mix the sound. Matyas, a major label veteran via his band The Waking Eyes and a touring member of Canadian indie rock stalwarts The Weakerthans, knew he wanted to write something for — or with — this innately gifted young singer if only to commit her voice to tape and hear what the results might be. The instantly compelling “Say You” was the song they soon whipped up, and one quick listen to what is now Imaginary Cities’ dramatic album opener clearly demonstrates what caught Matyas’s ear – and what subsequently propelled the duo to the top of Canada’s college charts and year-end best-of lists.

Growing up, Sarbit would take a break from Top 40 radio in her small Manitoba hometown by listening to her dad’s Ray Charles records. Matyas, on the other hand, “sort of went through the school of Canadian pop and listened to a lot of Beatles and Traveling Wilburys growing up. On our record there’s definitely a combination of old school pop and modern pop production with Marti’s sort of classic soul tinge in her voice.” Given Sarbit’s grounding in the Motown catalog, Canadian critics have often emphasized the soul-music aspect of the duo. Comparing Sarbit to contemporary R&B-singers like the U.K.’s Duffy and the late Amy Winehouse are not off base; she definitely has the sultry presence that made both of those artists so enthralling. Yet her performances also recall legendary new wave-era stars like the brash young Chrissie Hynde or San Francisco punk provocateur Debora Iyall of Romeo Void. Imaginary Cities uses R&B as just one flavor in a more expansive, often stirring, pop-rock palate– check out title track “Temporary Resident,” “Don’t Cry,” or “Hummingbird,” which has a “Come on, Come on, Come on” chorus that practically demands shouting along. They also take an amusing left turn with “Manitoba Bossa Nova,” which sounds just like the title suggests.

Perhaps what really makes Temporary Resident feel so fresh is that Sarbit and Matyas started out recording music for the sheer fun of it, with no agenda or overarching ambitions. Theirs was a freewheeling collaboration that took shape naturally once they’d completed “Say You.” They were so in tune with each other that before long they were spending almost all their waking hours working in a rehearsal space with a small, demo-worthy studio set-up. As Matyas recalls, “If it was going well after a few hours, we would stay until we had a finished song to take home. There’s an energy and excitement in the midst of writing and recording a new song that is almost guaranteed be absent if you come back to it another day.” That was all they really did at first, creating songs for as long as the muse was willing.

It proved difficult for the pair to keep tunes of this caliber to themselves. The Weakerthans manager, after hearing a few early demos, urged Marti and Rusty to form a band and focus on putting out a full record. “We hadn’t really thought of it before…and we said, sure, let’s give it a shot. All of a sudden we’re putting out a record and we’re traveling all over the freakin’ world.” They moved to a “real” studio to cut better quality versions of the songs they’d already carefully demo-ed. Matyas played all the instruments, except, as he notes, “some violin and saxophone. And there’s a drummer on one song. Otherwise it’s just Marti and me.”

Throughout 2011 Imaginary Cities’ debut has gradually been released in various territories outside of Canada, including Europe and Australia, where they toured last year, backed by a band they’d assembled with other Winnipeg-based musician friends. The duo’s reputation in their native country grew swiftly, particularly after they appeared at the North By Northeast Music Festival in Toronto last June. They won a Western Canada Music Award for Best Pop Album of the Year and were long-listed for the Polaris Prize, Canada’s version of Britain’s prestigious Mercury Prize. Along with their own increasingly well-attended club gigs, they snagged opening slots with groups like Ra Ra Riot and Besnard Lakes. Most impressively, they were invited to join the Pixies on the entire run of their North American tour last year, which put them in front of large audiences in both Canada and the U.S.

Which brings the Imaginary Cities story right up to now. In a little over a year, Rusty and Marti have evolved from strangers, to a pair of musical allies tinkering in the studio to part of a permanent five-piece band preparing for the U.S. release of Temporary Resident and subsequent tour dates. Imaginary Cities is proof that sometimes the best creative partnerships are simply destined to be. 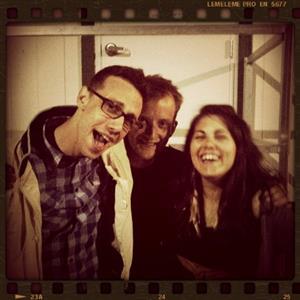