Random Recipe's name truly and simply suits their sound. With a fine mixture of human warmth, originality and musical inspiration from all over the world, Random Recipe was able to slip away from the attribution of a specific music tag by opening their horizon and offering a playful journey to the world. By doing so, the Montreal based band easily flirts with folk, hip-hop, bossa-nova, electro, tri-hop, lullaby, jazz, kazoo and much more while never losing their way. The result comes in perfectly crafted songs bursting of sweet reminders of their Italian, Quebecois, Louisiana and Chinese roots and inspirations of the moment (Language Studies, International Studies, choir singing, violin, stop-motion, poutine, origami, travelling, milk-shakes, etc.)

In a linear way, the story of Random Recipe grew out of a friendship between singer and guitarist Frannie and beat-boxer and rapper Fab, who met at a show in 2005. The duo then started jamming and began freestyling on the streets for fun. Following a fateful performance at a monthly open mic event at Quai des Brumes and the warm reception they received from the public, Random Recipe became an official act and launched these girls into this crazy trip! Vincent and Liu-Kong later join the ranks of the band and gave the duo the power to become a complete band.

Random Recipe created a considerable hype playing many shows around the city and at festivals (Montreal Jazz Festival, Pop Montreal, CMW, NXNE and Fringe Festival) and the band is already well established within Montreal's local music scene. Mixing unconventional musical sources such as a children’s guitar with beat-box improvisation, the band juggles around with styles and creates a tasty concoction of hip hop! While their lack of pretension adds to the accuracy of their amazing live performances, it’s no surprise that Random Recipe was hailed as one of Montreal’s up-and coming bands by Spin Magazine in 2008 and was prized by the MIMI for Best new band of 2009 ! They have also received the prize Rising star of the year of the GAMIQ 2010.

The band consists of vocalist and chiquita guitarra Frannie Holder, rapper and beat-box Fab, guitar, keys, bass and all the shizzle Vincent Legault and percussions and keys Liu-Kong Ha. 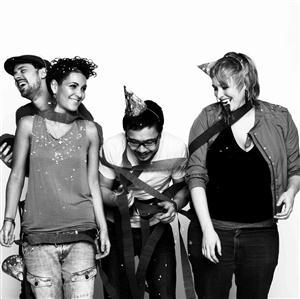