Olivia Korkola says that she has always loved music. It’s in her blood. When she was little and her girlfriends were dancing and singing along to Britney Spears and Avril Lavigne, Olivia had a secret musical passion – Don Messer and the fiddle music of Cape Breton. Her mom said that Olivia hid those albums when her friends came over, but encouraged by a music-loving family, she picked up a violin and started her journey in the world of Celtic and classical music.

Olivia’s instrument of choice is the violin and she knows how to use it. A classically trained musician, she works her magic with the violin as a member of the Thunder Bay Youth Symphony and under the instruction of Olga Medvedeva, practices for hours. “I love the violin,” says 16 year old Olivia. “It’s an instrument that allows you to musically express so many emotions.”

Olivia’s Gramma, Joan Saxberg, is an East Coaster who introduced the family to the music of Nova Scotia. Olivia enjoys exploring her family and musical heritage by playing the fiddle in the style of Cape Breton Celtic musicians. As a child, she remembers being surrounded by music. Her uncle, Lorne Saxberg, was a huge influence on her love of music. Lorne, also a classically trained musician, played Cape Breton-style piano. Olivia’s dad, Jeff, toured as a professional drummer, so he has always kept the beat for her. As well, her great grandfather Otto Korkola was a fiddler. His handmade fiddle was Olivia’s first instrument. Starting at the age of 12, her parents took her to Cape Breton so she could play and perfect her fiddle skills at the Ceilidh Trail School of Music, run by world reknowned fiddler and composer Jerry Holland.

“Jerry taught me the importance of connecting with a tune, and to play from my heart. He was an incredible player and one of the nicest people I’ve ever met.” In the car, on the way home, while listening to a Rankins CD in the car, she told her mom and dad “this is what I want to do,” and there has been no looking back. This summer will mark Olivia’s sixth trip to Cape Breton, where she will continue to study and perform.

After graduation from Hammarskjold High School next year, Olivia will be off to study music and record.  Her dream is to be a well-known performer who can “...show who I am through my music. I want to be different. I have so many ideas for music and performance.”

Olivia is hoping to start her own band in Toronto or Nova Scotia with fiddle, drums, singing, etc. Her dream band would have Slash on guitar! For now, she is more than happy to have her brother, Jesse, an accomplished musician in his own right, pick up his guitar and join her on stage.

Many awards have been coming Olivia’s way. Last summer, she won the Minnesota State Fiddle championship at the age of 15, and this year she travels for the second time to Southern Ontario to represent Thunder Bay in the Ontario Provincial Strings competition. Over the years, Olivia has regularly competed in the Lakehead Festival of Music and Arts in classical violin and fiddle categories. Her mom, Sandy, remembers her being so interested when young musicians took to the stage to receive awards such as the Dr. George E. Lister Memorial Tray.  “She used to say that one day, she’d like to win the tray. And this year she did! It was a dream come true for her.”

In the MTV age when fashion stylists and makeup artists make over the artist, Olivia marches to her own beat. She sets and defines her own look. It’s hard not to notice her in a crowd, with her long white-blond hair and distinctive fashion style. “I put together outfits based on how I’m feeling that day. I dress for the audience but I don’t want someone to tell me what to wear or how to wear it.”
Proud mom, Sandy, says she was initially nervous about her daughter’s career choice. She told Jane Saunders, Olivia’s music teacher at Hammarskjold, that Olivia wanted to pursue a career in music performance. Saunders didn’t miss a beat when she replied, “...and she should.”

It was the encouragement that a mom needed to hear. Music would be the career for her daughter. That is indeed music to the ears for audiences in Canada and beyond.
-Nancy Angus 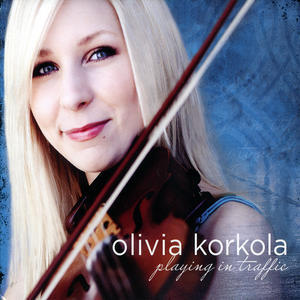