Formed around 1980 by punk rocker Rude van Steenes (ARSON) and Kurt LaPorte, GLAMATRON! is one of the best kept crate-digger secrets in the Canadian vaults. Their sole LP, Only the Heart Beats….Inside the Silence was self-released in 1981, and proudly showed its influences, Bowie, Roxy Music, Lou Reed, Marc Bolan & T-Rex, as well as early Ultravox, Wire and Magazine, on its sleeve.

Rude Van Steenes' Glamatron! was the antithesis of his previous Toronto punk act Arson. Channeling his anger into a New Wave stew of his heroes from the seventies like Bowie, Roxy Music, Lou Reed, Marc Bolan & T-Rex, in image while singing songs of isolation and experimentation that was distinctly Euro flavoured. The band did only three shows: one at the Domino Klub in Toronto, one for a live CBC new music series, and a college show. They were aloof and secretive to the point of re-buffing CITY-TV's 'New Music' show host Jeanne Bekker who had wanted an interview during their Domino Klub show. 'Only The Heart Beats...Inside The Silence' was their only release. Local rock station Q107-FM played their instrumental track called "Passport" in light rotation. 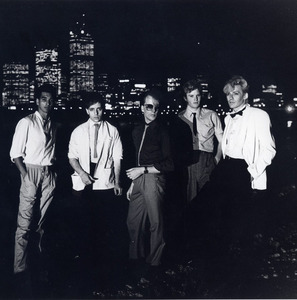