At the crossroads between Nashville Tennessee, Austin Texas and Calgary Alberta, lives the musical soul of J.R. Shore. Shore, an award-winning songwriter, is equal parts storyteller, social commentator and performer. Shore's songs provide a glimpse into years gone by, as well as present day characters with melody and lyrics that have audiences hanging on every line.

A multi-instrumentalist and vocalist, Shore began his musical career in the early 90's with the Grateful Dead inspired, Hiway 2. Original projects, Sgt. Singalong and the Military and Panama Red followed, with Shore developing greater and greater depth in his writing and performing. In 2004, Shore and his wife relocated to Music City, U.S.A. He seized the opportunity to see first-hand, what it takes to write and play with some of the best in the business. Extended journeys through the American South gave Shore a taste of where his music came from. Having the opportunity to rub shoulders with Buddy Miller, Chip Taylor and Guy Clark gave Shore the inspiration to spread his own wings wide and carve his own path. After two years in Nashville, playing such venues as The Bluebird Cafe, Mercy Lounge and The Basement, Shore was ready to return back to his home turf, Calgary, Alberta, and ply his songwriting trade in some familiar digs.

Upon his return home in 2007, Shore entered the Calgary Folk Festival Songwriting competition with one of his originals and another song co-written with his wife. These two songs won the best song by a newcomer and best song about Alberta, respectively. Another trip to the finals of the competition in 2008, and subsequent award, has firmly solidified his place among this province's best songsmiths.

Life in Nashville, and success back home, showed him that people wanted, and even more, needed, to hear these creations. From stories of retired bee keepers to tales of youth of the Navajo Nation, Shore's songs were meant to be heard.

Along with some of Canada's finest musicians, Shore plays unforgettable, organic music that is as welcomed in a 30-seat listening room, as it is in front of a 20,000-person outdoor concert. Performances at The Calgary Folk Music Festival, Cochrane Valley Folk Club, Canada Day Celebrations and listening rooms throughout Canada, prove his versatility.

On the heels of Shore's critically successful 2008 debut album, An Impeccable Shine, his sophomore record, Talkin' on a Bus, will be released in July, 2010. Produced by Edmonton's own, Barry Allen, Talkin' On a Bus is one of the most highly anticipated albums to come out of Alberta this year.

Much like one of his influences, Tom Waits, Shore's performances are rare. As a craftsman of song, these rare performances, as demonstrated with repeated sold-out shows throughout Western Canada, are not to be missed.

Talkin' On a Bus 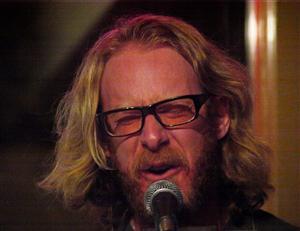