Jazz Trumpeter (Canada, 1 June, 1918 – 2 February, 2000)
Originally from Halifax, Nova Scotia, Wellman’s family came to Montreal when he was 4. He played in army bands during WWII, then in 1944 studied at the Conservatoire de musique du Québec à Montréal, while also playing in bands at the Café St. Michel. In the late 1940s, he played with the Sealey Brothers band at Rockhead’s Paradise. He then became the leader of the Rockhead’s house band until it closed in 1953, and resumed leadership when it re-opened in 1962. He was a member of Wilk’s Boptet which made Canada’s first bebop recordings. He was with the Ebony and Rhythm show at Rockhead’s that also toured and recorded. Then in 1965, he moved to Granby and led a trio with Walter Bacon and organist Hector Ford. He continued working primarily in the Eastern Townships, though he often

Me and My Trumpet 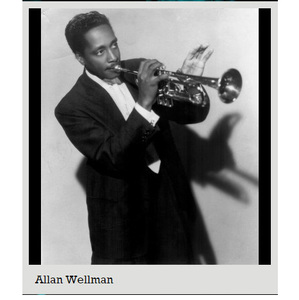