The Super Friendz are a band from Halifax, Nova Scotia, active between 1994 and 1997, reforming in 2003. Contemporaries of Sloan, their early work was on Sloan's Murderecords label.

The Super Friendz were formed in 1994 by three King's College students. Matt Murphy, who had earlier played guitar with Black Pool; bassist Charles Austin, briefly a part of Al Tuck and No Action; and guitarist Drew Yamada formed the core of the band. At first the band had no permanent drummer: at various times during their early years Chris Murphy (no relation to Matt) of Sloan, Cliff Gibb of Thrush Hermit, and Dave Marsh filled the role.

In 1994, The Super Friendz released a single on Chris Murphy's label, Murderecords, and later toured Canada with Sloan.

The following year, the band released Play the Game, Not Games, a 10-inch single, also on Murderecords. The songs on Play the Game--especially the contributions of Austin and Yamada—were significantly more experimental than on the album, and prefigured both the band's future work and its creative tension.

Mock Up, Scale Down was released in the United States in 1997 on March Records under the title Sticktoitiveness (which earlier had been the title of an independent tape made by the band). A few of the songs from Play the Game also appeared on the U.S. release.

The band broke up in 1997 so that the members could focus on new projects.

Matt Murphy later re-emerged with a new band called The Flashing Lights. He also played with the band City Field and starred in the film The Life and Hard Times of Guy Terrifico. Charles Austin is a recording engineer and producer in Halifax, Nova Scotia. Drew Yamada later toured with Mike O'Neill and others, before leaving the music industry full time to pursue post-secondary education.

Mock Up, Scale Down

Play the Game, Not Games 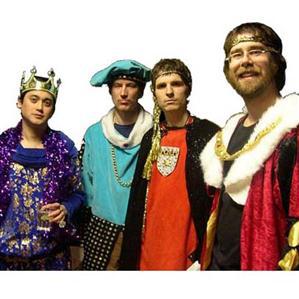