Steel River was a Canadian rock group based in Toronto which performed primarily during the 1970s. They are best known for a Canadian Top 10 single "Ten Pound Note" released in 1970.

Starting in 1965 as a part-time Toronto R&B club band called The Toronto Shotgun, Steel River decided to become full-time musicians in 1969. Greg Hambleton signed them to the Tuesday Record label, where their first single release was the Jay Telfer (A Passing Fancy) song "Ten Pound Note". The single hit Top-10 in Canada. It finished in Canada at #79 for the year.

In 1971 the band released a follow-up LP. They continued touring internationally until they disbanded in 1974.

Four out of five of the original members reunited briefly in 1980.

Vocalist John Dudgeon went on to release a solo single record in 1983 called "Put My Arms Around You" which received extensive airplay on CKFM (99.9) and numerous other stations in Canada and U.S. In 2004, he joined Mojo Grande, a funk/blues band from Markham, Ontario.

Walk By The River b/w If You Let Her Know 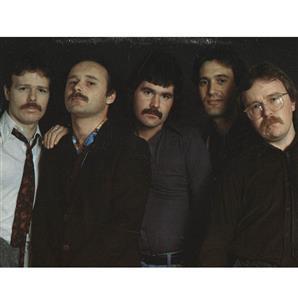