Brad Reynolds was born Ivan A. Reynolds on November 9, 1927 in Vancouver, British Columbia. Reynolds had His own radio show on CJIB in Vernon, British Columbia, before he signed with Al Reusch's Aragon Records as Buddy Reynolds in 1951, recording ten singles and two albums.

Red Foley was keen to do a U.S. cover of Reynold's biggest hit "Spruce Bug" in 1953, but couldn't secure the publishing and therefore lost interest. Other popular releases included "Roly Poly Heart" and "Ogopogo" - the letter about a Canadian Lochn Ness type monster.

Buddy left the music business and was working as a bus driver in White Rock, B.C., when Don Grashey contacted him to record on Zero (two as Brad Reynolds), he enrolled at a Radio school in California, eventually becoming a Country dee-jay in San Jose, California.

Georgie Porgie was co-written by Don Grashey and Jim Amadeo, the latter also went under the name Buddy De Val when he recorded "Are You Mine" with Myrna Lorrie. It was in San Jose where Grashey contactet him for some songs for Jerry Palmer. Reynolds later moved to Saudi Arabia to work in the industry dying there in 1984.

Sings Spruce Bug and Other Hits

Blue Okanagan // Over An Ocean Of Golden Dreams

I Was Only Foolin' (You Were Foolin' Too) // Centipede

Ogopogo b/w Your Love Has Changed to Jealousy 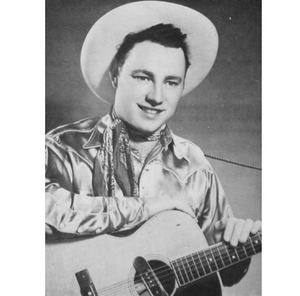