Pippus, John - Wrapped Up In The Blues 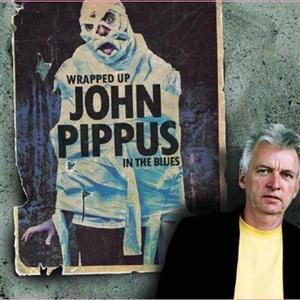 Long-time Vancouver singer-guitarist-harmonicat John Pippus has written all kinds of songs, including pop, rock, and country-tinged numbers with Jennifer Hershman, Ivan Boudreau, and Trooper’s Ra McGuire. But he has always asserted the primacy of them good ol’ blues, something he makes palpable in his Delta-centred third CD, Wrapped Up in the Blues.

The title, which recalls Nick Gravenites’s “Buried Alive in the Blues”, aptly conveys some of the white-boy-who’s-been-at-it-awhile quality of the music, which is gritty stuff at its best, and at its least merely amusing, as on the throwaway “Hard Headed Woman”. That solo acoustic number sounds like a demo, but producer Adam Bailie brings plenty of variety to the half-hour disc. Standouts include the rockabilly-flavoured “Airplane Woman”, which shows off bassist Darren Parris and drummer Tim Proznick to great effect, and the folky “One World”, which features additional vocals from Ronii Wata, who also adds fiery slide guitar to the house-rockin’ “Walk Away”.

Pippus has a lived-in voice that’s serviceable, in the Eric Clapton sense, but he stretches it in interesting ways, especially on “Son’s House”, a Bo Diddley–beated number obviously dedicated to Robert Johnson’s gruff teacher, who penned “Preachin’ Blues”—the only nonoriginal here, and the number with the most unexpected effects.
-Ken Eisner, www.straight.com