The novelist Thomas Wolfe coined the famous adage "you can't go home again." The members of Arcade Fire know this, because they tried. But when memories of youth stem from suburbs constructed for convenience, not permanence, those childhood memories become that much harder to trace.

Montreal's Arcade Fire explored the theme of neighborhoods on their 2004 breakthrough album Funeral (chosen by Rolling Stone as the #1 album of the '00s). In 2009, during a year off after a world tour for 2007's Neon Bible, frontman Win Butler received an email from an old friend he grew up with in the suburbs of Houston, Texas. "He sent us a picture of him with his daughter on his shoulders at the mall around the corner from where we lived," says Win, "and the combination of seeing this familiar place and seeing my friend with his child brought back a lot of feeling from that time. I found myself trying to remember the town that we grew up in and trying to retrace as much as I could remember."

At the same time, other band members of a similarly suburban origin across Canada had revisited their childhood environs and, in some cases, found there was not much left: buildings were boarded up, if they still existed at all; new roads and rivers had magically appeared, altering the landscape that now only existed in faded photographs. When they reconvened, the first song they wrote was The Suburbs' title track.

"We started working on the song, and once that started to sound like music, it felt like we were making an album," says Win. As the songs of The Suburbs started to take shape, a cohesive group of songs emerged, drawing on themes of loss and renewal, of drawing inspiration from scarcity, of generations past and future, of responsibility and maturity, of hoping that something pure can last.

These aren't unusual themes for the band - some of these songs would fit in easily on their debut 2003 EP, Us Kids Know. But if Funeral was driven by youthful exuberance and Neon Bible absorbed the weight of the world, The Suburbs, like its namesake, revels in open space, reflections on long drives, and contemplating possibilities. There is more breadth and beauty than on any previous Arcade Fire recording, featuring sparse pop ("Modern Man"), icy new wave epics ("No Celebration"), anthemic punk ("Month of May"), and lush balladry ("Suburban War"). Yet, they still sound hungry on hard-driving tracks like "Empty Room" and "Ready to Start," and with lyrics decrying wasted time, arms folded tight, and cities with no children.

The seven-piece band still believes that it takes a village to perform a song, but there is plenty of room to breathe on any given track; tiny details are doled out bit by bit. That attention to detail, that refusal to accept easy answers, embodies much of what the Arcade Fire does. This fiercely independent band has faced pressure from every corner of the music industry but carved out something beyond the grasps of the major-label system with great success, a combination of Internet word-of-mouth and old-fashioned live show impressions.

"We were lucky to be left to our own devices," says Win. "That afforded us a lot of control over our own destiny, which a lot of bands that are my heroes either never got or only got late in their careers. We've felt fortunate because - what else do you want? We're making records the way we want, and it's a great position to be in."

The Suburbs b/w Month of May 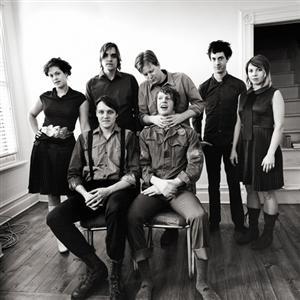