Pack A.D. - It Ws Fun While It Lasted 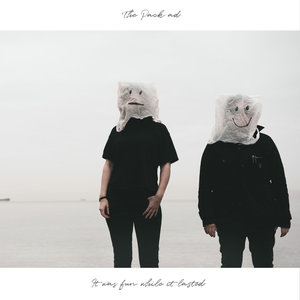 I know it was nearly thirteen years ago, because I was smoking a cigarette the first time I heard them play. I was enjoying what would go on to be one of my final Player’s Light regulars on that skinny smoky patio that hung off the side of the Railway Club, when the guitar snarled and thrummed from the mains inside. Then a no-frills drum beat kicked in, and something dormant deep inside my Yukon-born, bush-party-bonfire metal heart woke up and I butted out my smoke, and went inside to see who the fuck this awesome band was. I walked around the corner, fully expecting to see five scrawny dudes wearing black t-shirts crammed on to that tiny stage, but it was Maya Miller and Becky Black, two women making bigger and better noise than I had heard any heavy rock band make in years. I walked straight over to the merch table and snapped up a copy of Tintype.

That album stayed on repeat in my truck for months; I listened to it over and over, and memorized all the words. On one of the first hot days that summer I had to go pick up a friend of mine at the ferry terminal, and I had the windows down and the stereo cranked, and I got pulled over by the cops and they gave me a 360-dollar speeding ticket. I didn’t even realize I was going that fast. It was something about that relentless kick drum, I tried to tell the cop. You don’t even realize that it makes your right foot get so fucking heavy.

I don’t smoke anymore, but I still love this band.

This spring The Pack AD will release It Was Fun While It Lasted, their eighth, and, as both of them tell me, final album. It Was Fun While It Lasted began as a gathering up and repolishing of the B sides the duo recorded for their previous album, Positive Thinking, but then something else happened: the road dust settled, they added a couple of new songs, and there stood this record: defiant, determined, a little bit wiser, and, like a pair of near perfect parenthesis, my favourite work of theirs since Tintype first hit me in the guts 13 years ago.

It Was Fun While it lasted is both a love and a hate letter to the road. The fire-hardened spine of the band is omnipresent: the black leather boot stomping drums, the stark and sometimes dismal poetry scratched into the space between the lyrics, the why don’t you just watch me do it all by myself guitar lines, it’s all there. This is the last record of a band that has always always kept its promises.

These 12 songs dissemble and then stitch back together all of the things that many of us carry around in our mental luggage these days: depression, disconnect, deterioration, fatigue, frustration, fear. Fear of the lonely abyss, fear of planetary destruction, fear of the next school shooting.

The first track, and the first single, Give Up, tells you right away what this album is about, right to your face with no makeup on. It grinds the gears and grumbles about the music industry. “Say you give up, I give in.” the chorus admits.

“Making music and touring it, you are constantly reminded of how small you are, and you must summon enough ego to think that your contribution is even vaguely worthwhile.” says Becky over a black coffee and breakfast.

Maya nods and adds that after they tour this album, The Pack AD intends to pack it in. “I’m tired of being humbled.” she says.

“The lyrics in the second song, Reprogram, are a metaphor for two people communicating,” states Becky.

“For me it’s about alien abduction but what do I know?” Maya shrugs.

There are two instrumental tracks on the album, too, that both of them told me not to spend too much time on, since they have no lyrics, they said, but as a writer myself, I think they do, because titles are a kind of lyric, too, right? The first is Gas Station Food, and it’s a guitar riff romp interspersed with both of them screaming, inspired by biting into a bean burrito well past its sell-by date. The other is Check Engine Light, a slower, bluesy, electric guitar lament about every tour van they ever drove eventually flashing the dreaded red light, permanently.

All twelve songs do not waste anything. They are carefully crafted chaos, they are deliberately designed depictions of all the hope and the despair that making music for a living both brings to, and exacts from, an artist’s body, and her heart. There is fatigue in the words, and frustration too, but the drums are still relentless, and the guitar still wails and never gives up early. I can hear how much both musicians have grown, both instrumentally and lyrically, and there is more nuance here, and double meaning, and humour in the dark.

It Was Fun While It Lasted is more than just a swan song. It’s a skillfully written unapologetic break-up letter from two great musicians who have blessed us with one more record full of guts and heart and sweat and strength. They’re not leaving this tour van by the side of the road. They’re trading it in while it’s still got tons of good rubber on the tires.
-Ivan Coyote