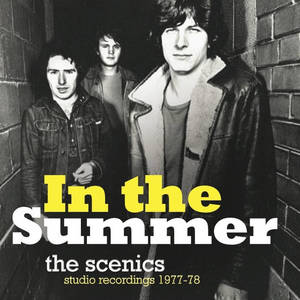 Italian pressing from the Rave Up label. Sharp, clear, warm remaster of original 1977-78 studio recordings by Victoria, BC, producer Joby Baker. Joby had two projects he produced up for Grammys this year. Original recordings done on 4 and 8 track reel to reel.

‘I don’t know much about this Canadian New Wave band that made these brilliant recordings in ’77 & ’78. Why they aren’t legends is hard to say.’ Roctober (Chicago)

"Brainy crackpot art-pop with an ear for off-kilter melody, a headful of magic & twitchy grooves to burn. It's a sin the Scenics have left such a faint mark on punk-rock history... but the reborn cult starts here.” Ben Rayner, Toronto Star

FREE - "How Does It Feel To Be Loved: The Scenics Play the Velvet Underground" CD with each order. (Top 10 CDs of 2008 Jeffrey Morgan, Village Voice. "The best VU tribute album ever... the Scenics don't ape the Velvets, they enhance them...” Detroit Metro Times. ”Stunning in the same way that the Byrds playing Bob Dylan was so stellar. This is a must...8/10” Johnson Cummins, The Montreal Mirror. Top 30, national Canadian campus charts.

Extensive liner notes by Colin Brunton, director of the Last Pogo and The Last Pogo Jumps Again, (Line producer on the Hedwig and the Angry Inch movie!) tell the story of the summer of 1977 day when he first met and first heard the Scenics. Sound is powerful, clear and nuanced- it's a new remaster by celebrated producer Joby Baker and it sounds like the original four track reel to reels, but better! Designed by award-winning designer David Montle, who has worked with The Scenics since 1979. Features photos by Brian Molyneaux and Rodney Bowes, including the photo used on the new Scenics T-shirt.

“It wasn't so much that The Scenics were ahead of their time in 1977, it's more that almost everybody else didn't even know what time it was. New York had Talking Heads, and England was blessed with XTC, but here was their equal in Toronto...”
-Bob Mersereau, "the Top 100 Canadian Albums"

“REISSUE PICK OF THE WEEK A- Highly worthwhile... The Scenics were strong enough that had circumstances been different they could have toured the continent’s clubs.” The Vinyl District.

“Long buried documents are always welcome but this one is quite special. 4 Stars” Kris Needs, Record Collector.