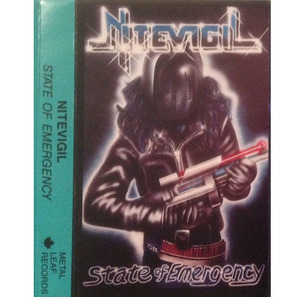 Formed in 1984, Nitevigil was a heavy metal/hard rock outfit from Vancouver, B.C., Canada. The original lineup of Phil English (vocals), Chris Wright (drums), Kris Ellis (guitars), and Bob Quelch (bass) had early success despite all being under the age of 17. One of those early highlights came in 1985 when Nitevigil finished third out of 400 entries in a popular Vancouver music talent search. As a result, they earned television appearances and a spot on the Vancouver Seeds 3 album released by MCA records. The song “Break The Ice” was featured on that album and received airplay on local radio stations.

1986 saw the departure of bass player Bob Quelch (later joined Infernal Majesty) and saw the arrival of bassist Robin Hughes. Nitevigil spent the next year and a half writing, recording, and performing many live shows including supporting Paul Dianno (original Iron Maiden vocalist) while building an ever growing following.

The end of 1987 saw the first big release for Nitevigil, a four song E.P. titled State Of Emergency. Recorded at the famed Mushroom Studios in Vancouver, it was released on their own label Metal Leaf Records and was only available on cassette. Through tireless self promotion and without the help of the internet, the E.P. reached underground radio stations, magazines, and newspapers where it was received with great reviews worldwide.

The loyal “Vigil” following began to grow and supported the band through different phases over the next few years. At the end of 1989, Dave Shannon (currently of Omnisight) replaced Kris Ellis as lead guitarist and after self managing for years, Nitevigil hired manager/recording engineer David Trigger. The band again went into intense writing/recording mode while still performing locally and also hitting the road for numerous mini tours through Western Canada as headliners and supporting name acts such as Lee Aaron and Sven Gali.

From 1990 to 1994, Nitevigil were a very polished live act and recorded many new songs that saw them go back to their heavier roots. Their last five song E.P. was recorded at the world famous Little Mountain Sound and from this E.P. came their first video for the song ‘Little By Little’. The video received light rotation on local TV music shows as well as Much Music Canada. It was at this time that the band was really at their peak and showed a great maturity and confidence in their writing and live performance.

The arrival of the Seattle grunge scene saw the final years for Nitevigil as it did for many hard rock/metal bands of the early 90’s. In 1994, hesitantly, Nitevigil, decided not to follow the new path of music and made the decision to disband.

Fast forward to 2014. Thanks to the internet there has been a resurfacing of the 1987 State Of Emergency E.P and from the support of many great reviews, Nitevigil have realized thousands of loyal fans old and new have kept the band alive, to which they are overwhelmed. This has prompted Phil English and Chris Wright (the two consistent members through the history of the band) to get in touch with all the old band members and start work on remastering old demos and masters with the plans of releasing their favourite songs from their ten year history. Look for Nitevigil (1984-1994) to be released on Itunes in late 2014.