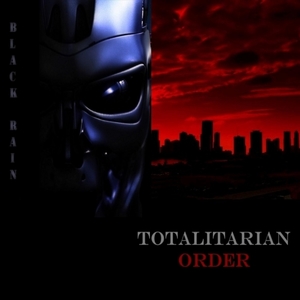 Leo Alipour’s solo effort BLACK RAIN has been around for ten years now, and has previously released three interesting albums. This year, he releases a fresh album called “Totalitarian Order” with concepts and themes of a dystopic future. The album is a thirteen-track strong classic heavy metal that is sure to please anyone. The album opens big time with “Cytec” immediately displaying Leo’s pure heavy metal chops on guitars and drums. The riffs that shortly follow the intro are a very good momentum buildup. The chorus is catchy enough to remain with you after just one listen. Following it is “2149” which is a monologue/instrumental intro to the title track itself. The title track is a bit off for me. The intro is overlong, vocal lines are too minimal, and the entire five minutes is simply uneventful if not completely empty.

The slump of the title track is quickly remedied by the next song “There Will Be Blood” with its thrashy riffs and the overall blazing aggressive mood. It also has a very good guitar solo that adds up to its spice. Following this song are three consecutive unnecessarily long tracks led by “Robotic Machinery”. Why is it unnecessarily long? Well, the mentioned song has two layers of intros. The song will be fine if either of the two was cut off. There are also lots of awkward transitions within the song where you’ll really feel alienated. The slow tempo also doesn’t help. With the message it bears with it, the song could’ve been a lot better if played twice its tempo.

Just as the album is nearing its conclusion, the 8-minute instrumental “Renaissance” enters the picture and blasts its way through. It has a very good touch of neoclassical music in it, and a little bit of an influence of MEGADETH and early METALLICA. “Still a Chance” is the most unique song in the album. The song is almost a power ballad, if not for the royal rumble at the fourth minute. While the majority of the track has a rather mellow approach, it doesn’t lose the dystopic vibe that had been established all throughout the album. Concluding the album is “Echoes of the Dead”. At last I can say that this 9-minute song actually caught my appreciation. Unlike the first songs that exceed the 7-minute mark, this song is a sure killer. It has a doom touch in it, it has its share of thrash elements, and the NWOBHM influences are strong. The overall experience is such a roller coaster of mood and tempo shifts that ends in a very elegant way.

Overall, I’ll say this album is a good one. It has lots of experimentation in it and most of those actually worked well. The production is also excellent achieving a vintage sound without sounding like it was recorded in a nasty garage. You also have to remember that this is a one-man effort, and being able to pull off an 84-minute long album is no joke.
-John Paul Romero