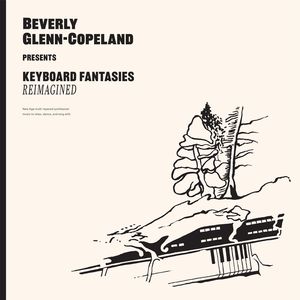 It may feel nowadays that you already have all the great music ever recorded on that little black box in your pocket, but Spotify doesn’t know everything. Although Beverly Glenn-Copeland’s four precious albums are there now, it wasn’t until the Philadelphia musician reached his mid-70s that a push began for him to be heard as a remarkable folk voice and electronica pioneer.

It took Japanese record collector Ryota Masuko to spot the lo-fi genius of Glenn-Copeland’s 1986 album Keyboard Fantasies, the sound of the Ontario-based composer fiddling at home with a basic synthesizer, a drum machine and an Atari computer. In 2015 he contacted the artist directly to see if he could buy any remaining copies. Given that it was self-released on cassette at the time and sold fewer than 100 copies, it’s fair to say this renewed interest must have come as a surprise, but since the album has been reissued, the numbers falling for his synth experiments and quivering, serious voice have grown and grown.

A compilation of past work, Transmissions, was released last year on the same record label that gave us Mercury winner Arlo Parks and indie giants Foals. A documentary about his unusual life, working on children’s TV shows such as Sesame Street and Canada’s Mr Dressup, coming out as a transgender man in later years and taking decades between unappreciated albums, toured the film festivals in 2019. And now an impressive array of admirers have come together to do some experiments of their own on the songs of Keyboard Fantasies, on a remix album released next week.

Mostly that involves repainting the hypnotic, hymn-like charm of that album’s opening track, Ever New. There are three versions among the eight songs here, totalling around 25 minutes of music. It would be hard to tire of its yearning melody, drifting through a glitchy, slowly pulsing version by Bon Iver with the singer Flock of Dimes, given a grand bassline and wafting strings by Kelsey Lu, and adorned with birdsong and a questing electric guitar line from Joseph Shabason & Thom Gill.
-David Smyth, Dec 10, 2021