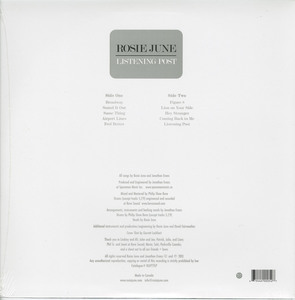 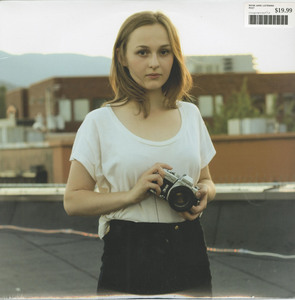 Produced and co-written by Jonathan Evans, the album centres around June's sweet, angelically cooed vocals, which are supported by toe-tapping beats and interweaving synths and electric guitars. Still, despite the prominent electronic elements and upbeat rhythms of "Sound It Out" and the rock propulsion of "Feel Better," this is a singer-songwriter record at its core.

Listening to BC native Rosie June’s winsome debut album evokes memories of 90's dreampop touchstones: Stereolab, Lush and the Sundays all come to mind. Those influences were at work well before the 21-year-old songwriter’s time, but the template is an ideal vehicle for her gossamer voice, which floats prettily over synth-fuelled melodies.

Savvy production on the more upbeat tracks that front-load the record adds welcome colour to what could’ve been conventional singer/songwriter material. For example, lead track Broadway’s soft beats work as ballast for June’s airy vocals, while Sound It Out’s buoyant guitar lines evoke NYC indie-popsters Ivy or BSS maestro Brendan Canning’s recent work – fitting, since the record’s re-release comes courtesy of Canning’s indie label. Comparisons aside, June has a sound all her own in the making. The impressionistic lyrics could use more depth, and the melodies’ relentless smoothness begs for more grit, but Listening Post still points to promising things.

Listening Post, Rosie June’s debut album, was originally independently released in 2013. Inspired by what he heard, Brendan Canning of Broken Social Scene fame signed June to his independent record label, Draper Street Records, calling it one of his favourite albums of the year. June’s album certainly does fit into a similar aesthetic as Canning’s own work, and her work hopefully sets the tone for the type of music we can expect from his label. The album opens with “Broadway,” a standout track that signals to things to come as June’s vocals float over seamless synths and gentle, but bright, percussion. The first half of the album remains similarly upbeat, before tracks such as “Airport Lines” and “Lion on Your Side” reveal the more melancholic side of June’s voice. Here, percussion is pared down and the listener is invited into her reflections on relationships and loss amongst whimsical and lush arrangements. While comparable to other Canadian acts such as Montreal’s Stars or BSS, Listening Point remains unique and deserves the second chance that it will hopefully receive with Draper Street Records’ re-release. (Draper Street Records, rosiejune.com)
-Danielle Marion