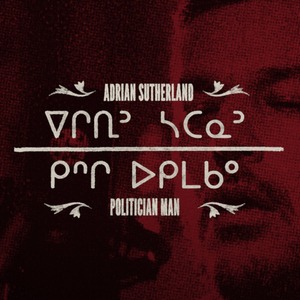 Politician Man is an award-winning protest song born out of Northern Canada that eerily echoes the situation in American politics – and totally by chance.

Politician Man was sparked by a contaminated water crisis in Adrian Sutherland's isolated Cree village Attawapiskat. Fed-up with politicians blaming each other, lack of action spanning decades, and 'third-world conditions' for Indigenous Peoples, Sutherland decided to send a message:

"Politician Man is about the relationship between people and their politicians, and the need for all of us to start listening to each other, and stop blaming. There is so much turmoil in the world today, and ordinary people often feel like they don't have a voice. We need our leaders to listen more and play politics less."

The Americana-style song is especially fitting for the USA given the current state of political affairs.

Adrian Sutherland, from the remote coast of Canada's James Bay, is a singer/songwriter, multi-instrumentalist, recording artist, and fascinating frontman and founder of Northern roots-rockers Midnight Shine. After four albums with his band since 2013, he is now working on solo music.

Debut single Politician Man reached #1 on the internationally-recognized Indigenous Music Countdown, while the powerful music video garnered a prestigious award from North America's oldest film festival. It has so far earned 55k views on YouTube, 34k Spotify streams, and terrestrial and satellite airplay across Canada, Germany, Australia, and the USA.

Adrian is a father of four, grandfather to four, speaks his Cree language, hunts to feed his family, and is a respected cultural leader. He practices traditional ways of the land and is a genuine example of someone who lives authentically. Passionate about empowering youth, Adrian is an artist ambassador for music and sports, and leads young people on wilderness initiatives for land-based learning.

With a growing and significant voice on many issues, Adrian speaks from his mind and cares from his heart. He is an insightful and resilient advocate with first-hand perspective on the challenges facing Attawapiskat and other First Nations, like contaminated water, housing shortages, food insecurity, rampant addiction, and the youth suicide crisis in the North.