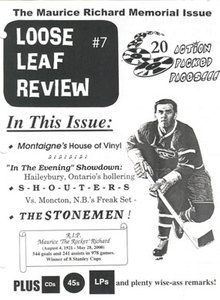 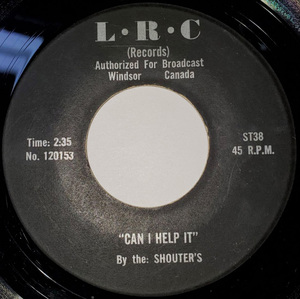 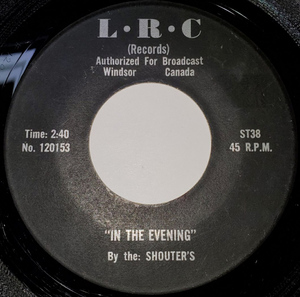 In The Evening b/w Can I Help It

Dave Whittaker, Yvon Dumas and Paul Thomas were childhood friends growing up in Kirkland Lake and neighbouring Haileybury – two mining town up in Northern Ontario. Paul met Gerry Lemire one day as he was hitching a ride over to Kirkland Lake for a band practice sometime during the summer of 1964. Within a week ‘The Shouters’ were born. The Line-up consisted of Dave (drums, harmonica & lead vocals), Gerry (bass & backing vocals), Paul (drums, harmonica & lead vocals) and Yvon (lead guitar & vocals). Bert Chartrand joined in 1965, freeing up Paul on organ. Dave and Paul alternated between drumming and singing lead. Their musical inspiration came from the hits of the Stones, Beatles, Chuck Berry, Paul Revere & the Raiders, The Turtles and James Brown. Paul was the group’s business manager, taking care of all the booking and networking that quickly became a daily routine. They ruled the local concert halls, which included the immense Kirkland Lake Arena, Club Sixty (in New Lisekeard) & The Park Lane Club. The boys were active in their community too, playing events like a New Year’s Ball to honour the effort of local Boy Scouts, their involvement with The Northwood Crippled Children’s Camp and Christmas Hospital. These gigs no doubt helped them finesse their way toward numerous choice hotspots in the region.

The combo won several battle-of-the-bands covering all Northern Ontario, beating out the likes of The Checkmates, The Changing Laynes, The Page Four, The Delrays and Satan & The Saints…possibly due to their wicked stage show. It not only ruled from the performance aspect, but also encompassed comedy skits that heavily encouraged audience participation. The group loved to see their audience burn-up the dance floor and have a good time, so they were big on whipping them into a frenzy by playing hot dance numbers – one such tune was “The Bounce”, which was probably brought to their attention from the version released by Ottawa’s famed Don Norman & The Other 4. As the band started drawing larger crowds, Paul decided it was time to look into making a record and start their ascent to the big leagues. They attempted their first recordings in November 1966. These were done in Kirkland Lake on some obviously primitive sound equipment. The result were two cuts scratched into an 8” acetate with “The Diary”, written & sung by Paul & Dave Whittaker, originally entitled “Uh-Huh-Huh”. These were nothing to set the world on fire, but provided the band with a good idea of the recording process and what their strengths and weaknesses were.

The fact that The Shouters even made a single was a total fluke! They later claimed that they were not that interested in making records after they’d realized that being a recording star wasn’t much fun at all! Fortunately for us, the opportunity presented itself and on a lark, the band decided to run with it. Local newspaper clippings mention another original they were looking to record as a single, “Little Angel”, but this never saw the light of day. The Shouters had a fan club by a fanatical teen named Ginette Lafond, who would keep locals up to date when the boys were on the road – remember there’s not that much for teenagers to do up North!

The group mainly played the Northern Ontario & Northwestern Quebec circuits. On a few occasions they also ventured south to play with the likes of The Sparrow & The Five Rogues (pre-Mandala). On one such Southern stint in December 1966, the band cut their only 45 for LRC – the Leamington Record Company which was not based in Leamington at all, but some 50kn away in Windsor, Ontario. Later concert ads actually mention that they had returned from Detroit, so it is possible that the single was recorded in the U.S.

If the 45 is any true representation of the group’s sound, then I can honestly understand the reason why they had such a fanatical legion of fans. Dave sings lead on “In The Evening” in a manner not unlike Jeff Conolly of Boston’s Lyres. Though not a soul number, there is a certain groove to it that is only interrupted when Yvan cuts loos with a raw guitar break. Paul takes over vocals and whines his way through the flip with “Can I Help It”. A custom pressing of 500 copies was made by ARC Records in Toronto in late January of 1967 and the band began selling copies stage-side at gigs. The single received little attention from radio and the press. RPM Magazine didn’t acknowledge its existence until the spring, and then only in brief passing. While in Windsor, the group appeared on the Swinging Set TV show and performed “In The Evening”, answered a few questions from the show’s host and then high-tailed it back home. The single stiffed on the charts, but did manage a bubbling-under 8th place position in the Canadian Top Ten of CJKL’s weekly survey.

During the summer of 1967 the group changed its name to P.T. & The Selected Few, though later, dropped the initials when they realized how lame it sounded. They made many attempts to break into the Toronto scene that year and when they failed to do so, retreated back to North to play in hotels and nightspots in places like Timmins, Fort Williams and Bridgeport. As was expected, there were some low points. Take for instance having to share a bill with ventriloquist Johnny Mean and his dummy Archie! By the spring of 1968 they were playing under the Paul Thomas Show moniker, having essentially being reduced to being a lounge act by the lowest common denominator effect that is the backbone of showbiz! They played a number of hotel gigs across Ontario backing Jimmy “Mr. Falsetto” Holmes – the former Ink Spots singer who, for a brief period, fancied himself as a soul-brother. He too would fall back on old standards when he realized that Soul music in the north was like a fish outta water.