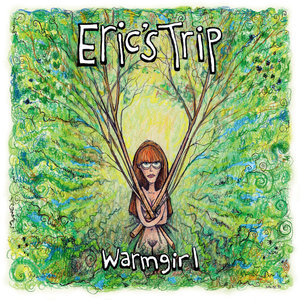 Here are the 2019 remixes made from the original 4track master tapes of Eric's Trip's fourth independently released cassette. Originally recorded and mixed in December 1991 by Rick.

This tape represents a big step up for us as it was the first recordings with our new drummer Mark Gaudet. Mark was a bit older than us but we loved his wild drumming style and asked him if he'd be interested in joining our band. After a bit of hesitation, he rehearsed with us a couple times in November 1991 and by December agreed to play on our next tape and maybe do a few shows. We started recording these tunes right away at our space in Chris's folks basement and got along well together.

This tape is also important in the fact that we sent it out to a guy named Peter Rowan in Fredericton who we heard had a record label called DTK in the 80's. We hoped he'd dig it and help us make a real record. He eventually got back to us calling from Halifax. His label was no more but he was working with a newly formed band named SLOAN and said they all really loved the tape. He asked us to come down a do a show in Halifax and we did. They helped spread the word about us down there which led to us getting more gigs, a session with a local producer to record for our first 7inch, putting out the "PETER e.p." on SLOAN's new label, and eventually to SUBPOP finding us. This tape was the start of a big adventure indeed.

Contains the first recorded version of "Red haired girl" which was remade in March for our first 7inch. Also "Blinded" which would be re-recorded in 93 for our SUBPOP LoveTara LP. This same version of the song "Tangles" was reused on our Peter ep. and "Warmgirl" was used on another 7inch in early 93.

All songs written by Rick White except for the cover of Madonna's "Open your Heart", and Chris's "Mask for you" that contains some lyrics from Leonard Cohen.

Bonus tracks 11-12 are from a live soundboard to cassette mix recorded at the Flamingo in Halifax on March 17th 1992. "Sickness" is a song we recorded as a three piece for the N.I.M. 10 inch just before Mark joined and this live version is one of very few recordings with Mark playing drums on it. This version of "September" is the only documented version of this song we have at all.