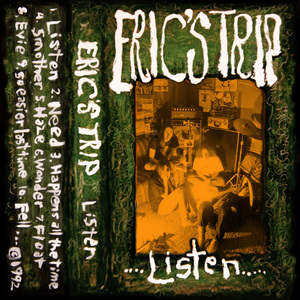 In the spring and summer of 1992 Eric's Trip had a new found excitement. We were getting really comfortable as a band, playing more shows, making new friends in Halifax, and writing lots of new songs. We recorded our first 7 inch in March, and while waiting for it's release, we were preparing another full length indie cassette album.

Chris and Julie switched instruments somewhere during the spring, but the change over went quite smoothly. We were still recording on an old cassette 4track at Chris's folks house, and by July i had these ten songs layed out. Even this cassette cover design was ready to go when the offer came to do a CD e.p. with Sloan's new Murder Records label.

With the idea of releasing our first CD now in my head, I wasn't happy with the recordings i had done here. The drums were especially not cutting through very well, the cymbal heavy one mic drum recording had very little clarity beneath the guitar and bass racket, i wanted to re-record it all again. We did more recording through the autumn, concentrating on getting a better sound, and eventually released new versions/mixes of NEED, LISTEN, HAPPENS ALL THE TIME, and HAZE along with a song from our "Warm Girl" cassette called TANGLES and an acoustic song Julie and I did called DEEPER. That release was called the "Peter e.p." named after a couple new guys in our life. Our new Moncton friend who's scratched glasses appear on the autumny cover, and Peter Rowan who was becoming our manager. People still thought it sounded "lo-fi".

One thing that's always haunted me about the released "Peter" e.p. is that it plays one semitone down in pitch. It's a little slow. I think the reason was because i sent off a stereo cassette copy of the final mix to master from and there must have been a pitch difference between the tape decks used. We tuned our guitars standard to 440, and for example "Need" starts in G when played, but it's F# on the CD. Over the years i kinda forgot about it until re-listening to this tape recently and hearing the songs in the right key again for the first time in 25 years.

So this "Listen" cassette album was left unreleased as a whole until now, though mixes of WONDER, EVIE and FELL (also with slowed pitch) were added to the "Long Days Ride..." compilation in 1996. EVIE's recording date was listed wrong in the album notes, saying Nov.92 instead of July. SMOTHER was re-recorded in early1993 for the "Never Mind the Molluscs" SubPop compilation 7inch, though this earlier version did eventually appear on our "Bootleg" 12 inch in 2007. This version of SO EASIER LAST TIME in a different mix was on the "Warm Girl" 7inch released in 1993, and FLOAT was re-recorded in Nov.93 for a Summershine/Subpop 7inch.

I always felt these 10 songs should have remained together as a group, and as noisy and rough as these recordings are, i thought some of you may enjoy hearing this.