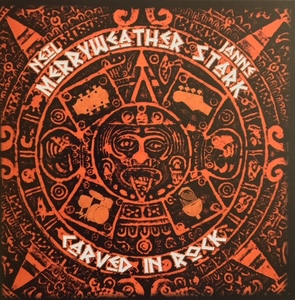 Merryweather Stark is the band moniker for Canadian bass player and vocalist Neil Merryweather and Swedish guitarist Janne Stark. Both musicians have prolific and impressive careers with various bands, individual appearances, and and personal projects across nearly five decades. Merryweather and Stark met when the former did vocals for several songs on Volume Three for Stark's Mountain Of Power band. The collaboration continued into Merryweather Stark and their first recording Carved In Rock.

The album title is apropos. Merryweather Stark basically plays heavy rock, with a touch of blues and psychedelic rock. Stark's riffs could be called both thick and brisk, but at times fuzzed out. Perhaps another way to describe his guitar style is raw and aggressive. His riffs and leads are definitely the centerpeice of the Merryweather Stark sound. On the vocals, Merryweather sings melodic and clean yet has a tone that tunes to Stark's guitar lines. Then there's the rhythm section which is also heavy and aggressive. as well, laying down a thick groove. Actually, of all these parts, I was quite impressed with the drumming. Though uncredited in the press release, this fellow lays down some great flourish and groove within Lay Your Body Down, Rockers Lament, and Love And War. After these things, the songs that captured the most interest were the ones where the psychedelic blues groove were stronger. Good examples come with We Got To Own This Thing, Give 'Em Hell, Boy, and What's It Gonna Be. Fundamentally, if you enjoy guitar-forward heavy rock spiced with a psychedelic blues feeling, you will appreciate Merryweather Stark's Carved In Rock.
-Craig Hartranft

NEIL MERRYWEATHER (SPACE RANGERS / STEVE MILLER / LITA FORD HEAVY CRUISER...ETC.) FROM LAS VEGAS (SIN CITY) IS AN AMAZING SOUL POWERED 70S ROCK VOCALIST WHO HAS BEEN KEEPING THE ROCK ALIVE SINCE THE LATE 60S AND LANDS WITH HIS HEAVIEST MUSICAL EFFORT TO DATE ON THE "CARVED IN ROCK" DISC. JANNE STARK (MOUNTAIN OF POWER LOCOMOTIVE BREATH / OVERDRIVE / CONSTANCIA / GRAND DESIGN...ETC) FROM SWEDEN IS A KICK-ASS, PROLIFIC, HARD RIFF-ROCKIN', SIX STRING ANIMAL WHO DEFINITELY ROCKS THE HOUSE DOWN WITH HIS POWERFUL BRAND OF KILLER HEAVY GUITAR ROCK RIFFAGE + AXE RIPPIN' LEAD GUITAR ACTION. THIS INTERNATIONAL HARD ROCK DUO FIRST JAMMED TOGETHER ON THE AWESOME MOUNTAIN OF POWER - "VOLUME THREE" DISC AND THAT OUTSTANDING MOP-V3 JAM LED TO THE EXCELLENT NEW BAND. BETWEEN THESE TWO CLASSIC HARD ROCK N' ROLL VETERANS, THEY HAVE BOTH LANDED AND BEEN PART OF OVER 100 DISCS WHICH IS ALL ABOUT THE ROCK!!!