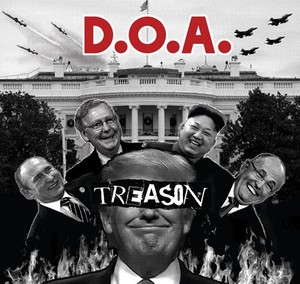 If an actor or a reality show host can become President and wreak havoc around the world, then surely musicians have a time honoured duty of reacting to that and speaking up for regular people. Punk rock legends D.O.A. have decided to do just that. That's why you have the new D.O.A. album: Treason.

Joey Shithead Keithley, Canada's Godfather of Punk, has been getting sick of the dismaying news coming out of world capitals like Washington, Moscow, Beijing, Tehran, Pyongyang etc., so he decided to come up with D.O.A.'s musical reaction to this crap and stand up against corruption, warmongering, racism, sexism and global warming.

So here it is: Treason, it's the band's eighteenth album. It takes off in full frenzy with All The President's Men – "It's time to put them in the pen". Then D.O.A. quickly launches into a modern punk anthem: Wait Till Tomorrow, a look at the brutal treatment of refugees.

But never lost on D.O.A., is that part of their mantra that is punk rock humour, hence they have spawned: It Was D.O.A., an uproarious piss take on unsuspecting musicians that will soon learn the tough lessons of the road: the D.O.A. members themselves.

Of course with an album named Treason you would expect some comment on President Donald Trump. So the Men of Action, Joey and his rhythm section: Paddy Duddy (drums) and Mike "Corkscrew" Hodsall (bass) have taken one of their all-time classics and come up with new lyrics. They have reworked Fucked Up Ronnie, the result is Fucked Up Donald and it's a blistering 73 seconds of mayhem!

Along the way Treason flips the corrupt system the bird with wild tunes like: Gonna Set You Straight, Just Got Back From The USA and It's Treason. There's also an absolutely ripping version of fellow Canadian Neil Young's Hey Hey. My My, where D.O.A. takes a unique approach that has anguish and fire at the same time.

On Treason D.O.A pulls no punches and nor should they. What you get is an uncontrollable punk rock riot that seems to breathe fire, the way punk was meant to be.

Vancouver’s D.O.A. practically invented hardcore punk away back in the early 80s. Vancouver never gets its due as one of the most important punk cities after London and New York. Away on the Upper Left Coast of North America, deep in the rainforest, Vancouver produced a whole raft of punk bands from the UK3RK5 to Young Canadians to Subhumans to the Pointed Sticks to The Dishrags. SNFU eventually relocated to the Terminal City, joined by bands like NoMeansNo, Mecca Normal, The Hanson Brothers, and by the 90s, Vancouver’s underground punk scene was vibrant (this was also my time in the scene), with bands like the Real Mackenzies, Facepuller, D.B.S., and a whole bunch more.

Most of these bands imploded, exploded, or simply faded away. Gerry ‘Useless’ Hannah of the Subhumans was a member of the Vancouver 5, who called themselves ‘urban guerillas’ with leftist politics who carried out a series of bombings, mostly in British Columbia that led to Hannah spending five years in prison. NoMeansNo (who were my neighbours in East Van) eventually just retired. But D.O.A. are still flying the punk flag after originally forming in 1978. Joe ‘Shithead’ Keithley is the only original member of the band, having been joined by bassist Mike Hodsall and drummer Paddy Duddy when he revived the D.O.A. name from the mothballs in 2014. Keithley is almost old enough to collect his Canada pension, and here he is making music as relevant and as vital in 2020 as he was in 1981, when D.O.A. released one of the seminal hardcore albums, Hardcore ’81.

I first met D.O.A. at, of all places, a David Lee Roth concert in 1987, at the Pacific Coliseum in Vancouver. I was 13, and went to go see Diamond Dave because 1) My friends dug him, and 2) I dug him. I still do. So there. Poison were supposed to open, but the night before in Tacoma, bassist Bobby Doll pinched a nerve in the neck, and so, the promotors drafted in a local band, D.O.A. What the promotor was thinking, I’m not sure. What D.O.A. was thinking, I am pretty sure. This was a chance to mock the jocks, flip the bird at the cheeseballs. It was glorious. They got booed mercilessly. They used real chainsaws on stage for sound effects. They played the Subhumans’ ‘Fuck You.’ I realized right then that I had made some poor life choices, and resolved to fix that immediately.

I got into punk, and post-punk. I discovered alternative music. I got deeper into D.O.A., who had a video on MuchMusic around that time, a cover of BTO’s ‘Takin’ Care of Business.’ The video was great, it had our punks playing hockey against a team of suits, with Randy Bachman himself as the punk’s coach and appearing on stage with the band, mullett and all.

Anyway. Treason is D.O.A.’s 19th album, and first since 2018’s Fight Back. It is glorious. All hardcore and fury, Keithley’s voice has aged well, it is a bit deeper and gruffer than it was, but still full of indignant and righteous fury. The target of the fury is obvious from the album cover, which shows the 45th President’s head in front of the White House, with Rudy Giuliani, Kim Jong Un, Mitch McConnell, and Vladimir Putin, all smiling maniacally. The first track is ‘All the President’s Men,’ which attacks the corruption around 45:

All the President’s men, it’s time to put them in the pen
Lock them up, lock them up, don’t let them free, throw away the key Make America great again, make them pay for their sins
The President’s Men
You see them now, copping a plea, cutting a deal to stay free
But they’re running out of places, to hide
The money was good, they built a stash
Prosecution Is coming fast
The President was never on your side
Humpty Dumpty wanted a wall
But Humpty Dumpty is gonna have a fall.

‘Wait for Tomorrow’ is about 45’s administration’s immigration policies on the Southern border. ‘Just Got Back from the USA’ is as unambiguous:

Hey! Hey! Get out of my way, I just got back from the USA
There’s racists marching in the street, ‘cause the White House is paving the way
They’re rubbing their crotches and shooting their guns
So you better watch out, watch out today.

Now he’s Prez, but he don’t have a clue
He’ll build a wall and punkish women too
He’ll nuke Korea and bomb Iran
And when he cuts a deal, we’ll all get scammed.

The political argument builds to the last track, ‘It’s Treason,’ which is a direct attack on 45, citing his litany of mis-steps, from Russia to the endless lies to his propaganda machine. But Keithley has no illusions that things are going to get better anytime soon, noting that it’s getting worse.

The album, which clocks all of 19 minutes across 8 songs, has some moments of levity. ‘It was D.O.A.’ is hilarious, as Keithley sings from the perspective of some anonymous drummer in the glory days of the early 80s.

Way down in old Vancouver town, I didn’t have a dollar to lay on down
In an old van Joey Shithead drove my way and said “Hey you wanna drum for D.O.A.?”
It was D.O.A., It Was D.O.A., my back still aches when I hear that name
“I’ll only give you five bucks a day, but if you’re any good, you’ll get a raise in pay
Your bed’s all ready on the floor of the van, if you need to take a piss, just grab a beer can”
…
At the last show, a skinhead started a fight, with a broken hand I had to play that night
Joe said “Play your parts right, or you’ll get no pay, for sitting’ there picking at your nose all day!”

To be fair, though, D.O.A. have not had a revolving drum stool. Chuck Biscuits was the first drummer, before leaving in 1982 to join Black Flag (he eventually played in another of my favourite bands, Social Distortion), he was replaced by Dimwit, who lasted until 1985, and then Jon Card pounded the skins until the band split for the first time in 1990. Whatevs, man, it’s a killer track.

D.O.A. also has long been a great cover band, from the Subhumans when I saw them, to P.F. Sloan’s ‘Eve of Destruction’ on their 1982 album War on 45 (which was re-recorded as the backing track on the ‘Fucked Up Donald’ single in 2016) to, of course, that wicked cover of ‘Taking Care of Business.’ Here, it’s fellow Canadian Neil Young’s ‘My, My, Hey, Hey.’ Young’s original, when plugged in, is messy and became an influence on later punks (and quoted by Kurt Cobain in his suicide letter), but to hear Keithley and his band take the track on means something more when he sings

The king is gone, but he’s not forgotten
This is the story of Johnny Rotten.

And that’s because Keithley was there, one of Vancouver’s first punks, he saw all that happen, even if it was from a distant star on the opposite side of the world from London. And at 3.37, it’s the longest song on the album by nearly a full minute.