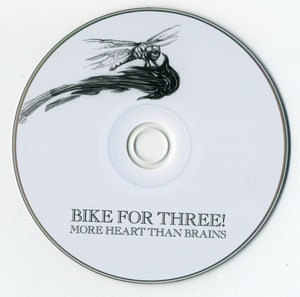 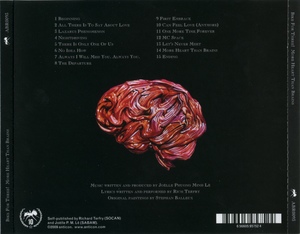 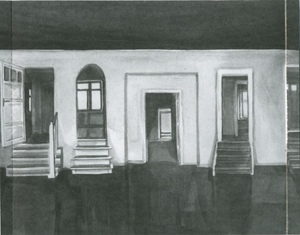 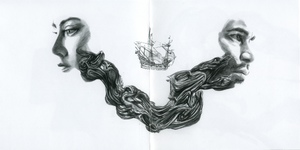 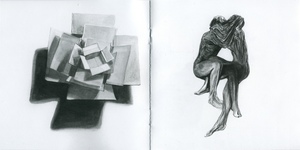 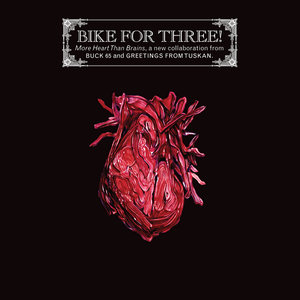 Musical collaborations across great distances have many challenges. First you have to find ways to keep the energy alive and cohesive without being able to feed off each other on the spot; then there are time differences to negotiate and the natural ebb and flow of personal inspiration and schedules to plan around. With these obstacles in place, it's tough to remain on the same page as your collaborator. So how about when you've never met the musician you are working with? Such was the case for Belgian-based producer Joëlle Phuong Minh Lê (Greetings From Tuskan) and Canadian indie-rap artist Buck 65 when they created their debut album, More Heart Than Brains, under the moniker Bike For Three! (Full disclosure: I contributed a guitar part to a track from Buck 65's Dirtbike Trilogy.)

Of course, there are advantages to writing songs this way. Since each presence is designed to motivate the other from afar and relies on an interdependent exchange of surprises and ideas, a clearer mesh of distinct identities can emerge. This is certainly the case on More Heart Than Brains. As it's name reflects, this is a highly personal and tender album, rich with musings on adventure, love, and the mysteries of life. Phuong Minh Lê, an outstanding electronic artist, handled the composition and production, while Buck 65 contributed the lyrics, which run fast and furious through every track with his typically visceral and expressive delivery.

Both musicians stand apart-- Buck 65 with his sharp lyrical details and storytelling, and the flinty glitz of Phuong Minh Lê's exquisite, shimmering landscape that rarely plays by the rules as it constantly shifts and dives, resurfacing unpredictably as she throws remarkable textural surprises into the mix. Together they create something very special. "Nightdriving", "Lazarus Phenomenon", and "Always I Will Miss You. Always You", show Bike For Three! at their best as their ideas fuse seamlessly and naturally. A couple of times things fall off track, such as the futuristic, awkward shagginess of "MC Space", but it's mostly exciting to hear Buck 65, who has been fiercely productive for 15 years, rise to the challenges set by Phuong Minh Lê.

There's something almost voyeuristic in listening to such an intimate musical relationship built on exchanging confidential messages to one another, but it's this warmth that gives the record its spirit. More Heart Than Brains shows that Bike For Three! have plenty of ideas left to mine in the future, whether they meet or not. Perhaps they never will. As Buck 65 sings on "Let's Never Meet": "Let's never meet and regret a past endeavor/ What we have is rare indeed and guaranteed to last forever."

Bike For Three! is the well-lucked and mysterious cross-continental duo of Canadian indie-rap legend Richard Terfry (Buck 65) and budding Belgian electronicist Joëlle Phuong Minh Lê (Greetings From Tuskan). Shrouded in strange magic, anchored by the heavy stuff of life, and lifted by a mutual magnetism still uncharted, their music is a bright/stunning combination of downtempo textures, smart pop, and exposed lyrical bones.

Over 15 years, Richard has carved out a corner of hip-hop history by unraveling ornate and dust-caked yarns, often over beat-addled soundscapes, as on his seminal “Language Arts” album series (Anticon released part three, Man Overboard, in ’01), and unadorned as well (he recently became host of CBC’s “Radio 2 Drive” show). For his last record, 2007’s Situation (released on Sage Francis’ Strange Famous label), the man crafted an entire song-cycle around the narrative minutiae of 1957—Rich’s love for a good story is famous. Considering, he couldn’t have found a better partner for his latest work.

Joëlle was raised in Brussels by her Vietnamese mother, a painter and a chef, and remembers fondly the piquant scents she’d chase around mom’s restaurant. She was infatuated with the piano at her primary school, and took lessons when she wasn’t painting or tinkering with music boxes. She learned cello too, pursued photography (she’s now a successful digital video artist), and studied music theory in college, where she discovered that art-making brought back her childhood memories in vivid detail. She has magic secrets—and perhaps a touch of clairvoyance—that she put to work in creating 2006’s striking Greetings From Tuskan LP debut, Lullabies For The Warriors. To this day, there are details that even Rich doesn’t understand about Joëlle’s immaculate productions. Naturally, that’s another detail that he loves.

Bike For Three!’s constituent parts have never met in person, and they might not ever. She found him, and their story unfurls in real time along with their songs. Joëlle sends Rich music; Rich writes to the moods and movements that she’s designed; Joëlle nurtures each piece into an animate whole. Bf3! actually finds Buck 65 eschewing traditional narrative forms in favor of an intimate stream of consciousness (offset by tight rhyme cadence) that mines the craggier depths of romance both requited and out-of-reach, real and imagined (which perfectly befits Bf3!’s working relationship). The things Rich wouldn’t speak of in conversation thus become part of the conversation happening on record.

More Heart Than Brains, Bf3!’s album debut, is Buck 65’s first record to feature all electronic production. Of course, Joëlle has a few acoustic tricks up her sleeve—those music boxes from her youth, for instance—and an approach that seats her comfortably amongst such mercurial beat auteurs as Boom Bip, Modeselektor, Michna, and labelmate Alias. That Rich returns to Anticon a nearly decade later to release his most personal album yet is both an honor and the logical continuation of the label’s own story (Sage Francis did the same with Personal Journals in ’02). As for Bike For Three!, consider this Chapter One.