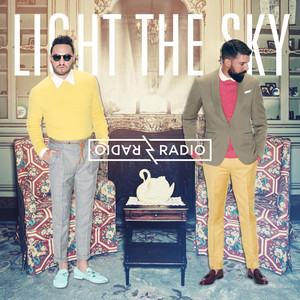 Light the Sky will make you cut a rug and bust a gut — the new LP by Nova Scotian rap duo Radio Radio is as catchy as it is funny. The former can be attributed to its slickly polished production, which rivals any Top 40 hit, and those seriously professional beats make their zany lyrics all the more jarringly hilarious.

On prior releases, the duo rapped mostly in their Acadian Chiac dialect; Sky is their first entirely English LP. Despite it not being their mother tongue, Radio Radio have an astute sense of both humour and slang in their adopted language, with one half of the duo rapping: "I'm gonna have a ménage a trois/ With me myself and I," over throbbing synths and bass on "Solo Dance Party (feat. Leaf)." Funnier still is "Remodel (Mike Holmes)," an ode to Canada's most famous home improvement contractor that features stark '80s horror flick keyboard playing juxtaposed with grin-inducing lines like "We can fix it with paint / It's like the shrine of a saint." "Sweater Weather," meanwhile, teams dramatic orchestral strings with elaborate lines like: "Your Mama's got the hots for me… They got me cutting the turkey / Holy shit n' God damn, babe your Dad's getting flirty!" Radio Radio are equally adept at more straightforwardly absurd silliness, like on the chorus for "Busy," which goes: "Busy wizzy, wizzy wizzaayyy…"

Fans of goofy rap acts like the Lonely Island will not only love Light the Sky's jokes, but also marvel at its top-notch musicality. Comedy and music rarely fall so thoroughly in step. (Bonsound)
-Exclaim

Light the Sky, Radio Radio‘s fifth album, is available now online (Bandcamp / iTunes) and in stores! And make sure to get your tickets for the band’s upcoming tour!

The band’s new album once again travels across unique, but familiar, worlds. Songs like Busy and Happy Hustler reference life in the fast lane, while Sweater Weather delves into relationship complexities and Remodel (Mike Holmes) mockingly pays homage to home renovations, a common reality for some in their mid-thirties. The energy is palpable in this joyful album full of rhythms and hip-hop/electro melodies created by Shash’U (Fool’s Gold Records), DJ Champion, J.u.D. and Alex McMahon (who also produced the album).