Kwenders, Pierre - MAKANDA at the End of Space, the Beginning of Time 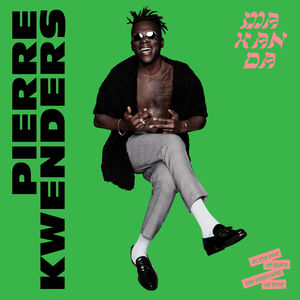 The distance between Kinshasa, Democratic Republic of the Congo, and Montreal, Quebec: 6,386 miles. Between Montreal and Seattle: 2,287 miles. Together that’s over a quarter of the planet that’s circumscribed by Pierre Kwenders’ second album. With roots in several nations, lyrics in four languages, a firm grasp of African musical tradition, and a sumptuous vision of the future, MAKANDA at the End of Space, the Beginning of Time is one of the most wide-ranging musical expressions of 2017. Yet the wonder is not in how panoramic it sounds but in how comfortably it encompasses its span.

Kwenders’ music begins as an update of Congolese rumba, aka rumba Lingala, an Africanized variation of Cuban son that arose in DRC and its neighbor, Republic of the Congo, in the 1940s. Of course, son is a Cubanized variation of old Central African rhythms that were transported westward across the Atlantic hundreds of years earlier, during the Spanish slave trade. The ethnomusicology behind this stuff is fascinating, revealing bloodlines that trace the very DNA of rhythm. But the music of MAKANDA hits with more of-the-moment urgency than a family tree can impart.

Kwenders was born in Kinshasa and moved with his family to Montreal when he was a teenager. His first taste of performance came in the city’s Congolese-Catholic choir, followed by years of youthful exploration alongside intrepid Quebecois hip-hop, electronic, and Afropop producers. He released his first EP, Whisky & Tea, in 2013, and his first album, Le Dernier Empereur Bantou—“The Last Bantu Emperor,” a reference to the Bantu Empire that flourished in Central Africa for centuries before colonization—the following year. Even then he was subsuming distance and crunching genres to establish a kind of musical ubiquity.

Around that time, another restlessly inventive member of the African diaspora, Tendai Maraire of Shabazz Palaces, was drawn into Kwenders’ orbit, and the two began sharing tracks and ideas about Africa’s growing clout in global popular culture. Kwenders suggested that Maraire, born in Seattle of Zimbabwean parents and raised on a diet of hip-hop and mbira, the traditional African thumb piano, produce a song or two for his next record; Maraire wanted to helm production for the entire project. In 2016 Kwenders visited Seattle for three recording sessions in Maraire’s studio, working with a cast of local talent, some of African heritage, like trumpeter Owuor Arunga and guitarist Hussein “H-Bomb” Kalonji; some Shabazz-related, like Ishmael Butler, Cat Harris-White, and Darrius Willrich; some from Seattle’s deep pool of working musicians, like upright bassist Evan Flory-Barnes and composer/violinist Andrew Joslyn.

So many players and so much backstory somehow add up to a remarkably cohesive, distinctive sound. Credit Kwenders for the inspiration and Maraire for helping refine it: MAKANDA is built of layers of electronic and hand percussion, humming synths, wah-wah guitar (Kalonji is on almost every track), and Kwenders’ amicable, unhurried vocals, sung-rapped in Lingala, Tshiluba, English, and French, the official language of both DRC and Montreal. Per translation, Kwenders sings mostly of love and its capacity to transcend, liberate, empower. His poetic eye seems fixed on whatever feeling, setting, or celebration is coming next.

Maraire’s production rounds the edges of almost every sound here, and he employs copious reverb as a sort of sonic area rug that pulls the disparate components together. This is luscious, liquid music, a billowing stream that fills the contours of mental space. There’s dissonance, too: “Woods of Solitude” contains drony, metallic feedback of the sort you might hear from Konono No. 1. That chiming mbira and bristling MPC beat on “Makanda” are a familiar, Shabazz-like foil for Butler’s elegant flow, and “Welele” bumps on percolating hand percussion and slinky funk guitar.

Among songs that flow one into the next, the centerpiece of the album comes midway, with “Rendezvous” and “Sexus Plexus Nexus.” The first is a meditation on a groove, building incrementally over hand shakers and Kalonji’s highlife-esque guitar. Kwenders sings about unfettered freedom, namechecking Paris, Kinshasa, and Moonshine, his monthly dance party in Montreal. Trumpet and saxophone saunter into the scene, vocal melodies overlap, and a curious, flutey synth floats through. It’s a gorgeous musical moment, and a generous one, extended over five-and-a-half minutes.

“Rendezvous” curves right into “Sexus,” the album’s lead single and one of the year’s standout jams. All the album’s musical elements come together with Kwenders’ most hook-forward writing to build a song that comprises an entire worldview. Even as it references Henry Miller, “Sexus” is a communion of pan-African and North American soul music, interwoven with strings and sax and reverbed vocals, reaching across continents and decades and also ideal for roller skating to next Saturday night. That’s the marvel of MAKANDA: Kwenders’ version of globalization feels perfectly at home everywhere, all the time.
-pitchfork

This is Afro-Canadian Pierre Kwenders’ second album. His single Sexus Plexus Nexus dropped June 20th & was featured on Pitchfork. He’s often collaborated with DJ Windows98 (Win Butler) & recently he supported Arcade Fire at their annual fundraiser for the charity Kanpe. His first album, out in 2014, earned a JUNO nod & was Polaris longlisted. His first single Mardi Gras is a fan-favorite at shows.