Patershuk, Matt - If Wishes Were Horses 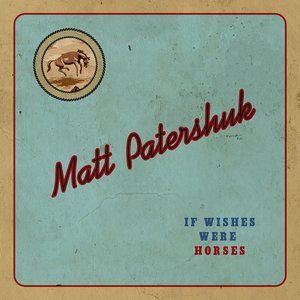 Somewhere out past where the highway ends, far from the creative meccas of Montreal, Toronto and Vancouver, one of Canada’s best-kept musical secrets has been perfecting his craft. For more than a decade now, Matt Patershuk – who resides in rural northern Alberta - has been writing and performing some of the most beautiful, endearing and true music ever created in this country. His newest album, ‘If Wishes Were Horses’ communicates the huge strides Matt has made as an artist since the release of ‘Same As I Have Ever Been’, his last release from 2017, and represents his fourth collaboration with the award winning string player and producer, Steve Dawson.

The natural chemistry, intuition and trust that Steve and Matt have developed over the years can be heard in every song on ‘If Wishes Were Horses’ as the pair have created a flowing, organic sound that is seamless from beginning to end. These new songs cover a lot of territory, ranging from country waltzes to straight up folk and greasy blues. ‘If Wishes Were Horses’ is a creative tour de force that perfectly illuminates the scope of the La Glace, Alberta resident’s musical talents.

The songs on ‘If Wishes Were Horses’ extend the themes of individual integrity, hard work, family and loss that have been explored on all of Matt Patershuk’s recordings. Like those of John Prine and Kris Kristofferson, Matt’s songs communicate the significance of small moments. Rendered in simple language, his lyrics extrapolate on what he has seen so that his observations become touchstones for deeper, universal insights and experiences, exploring the thin line between winning and losing, tenderness and resolve.

Whether he’s recounting a bad night in the life of a country legend as he does on ‘Ernest Tubb Had Fuzzy Slippers’ or howling the blues of ‘Red Hot Poker’, Matt’s voice is so intimate, lived in and true that you almost don’t have to listen to the lyrics to understand what he’s singing about. When he approaches a country song like ‘Let’s Give This Bottle A Black Eye’, the delivery is so natural and worn in that you could be forgiven for thinking it was an undiscovered gem by Hank Williams or George Jones. When he sings a blues like ‘Velvet Bulldozer’ - an original tune written from the perspective of Albert King working his day job - his unforced growl is so deep and pure that the distance between the singer and the song disappears.

A master songwriter, it’s in the intersection between lyrics and melody that Matt Patershuk’s musical magic finds its truest expression. Other highlights include a bluesy take on Jerry Garcia’s ‘Sugaree’ that perfectly complements the mood set by the original songs. In a departure from Matt’s usual approach to structuring an album, four instrumental tracks are interspersed throughout ‘If Wishes Were Horses’. They are all variations on a single melody that are spooky, moody, cinematic, and lilting – sometimes all at the same time – and work as gorgeous extensions of Matt’s songs.

Like all Black Hen recordings, ‘If Wishes Were Horses’ is a musical treat from beginning to end. To make these new songs come to life, producer Steve Dawson gathered a fine band including Chris Gestrin (keys), Jeremy Holmes (bass) and Gary Craig (drums) to record at Vancouver’s acoustically perfect Warehouse Studios. Hunkered down in the studio together, the songs unfolded naturally and in real time. Studio legend Charlie McCoy dropped by to add some tasty harmonica and Kristin Weber and Larissa Maestro were brought on board to contribute strings and background vocals on several songs.

With its beautiful songs, powerful singing and gorgeous instrumentation, ‘If Wishes Were Horses’ will surely be remembered as one of the most exciting roots releases of 2019. On ‘Velvet Bulldozer’Matt sings, “I sit back and smoke my pipe. I think of my voice on the radio and wonder, man, what would that be like?” If there’s any justice in the world, Matt Patershuk won’t have to wonder for much longer.