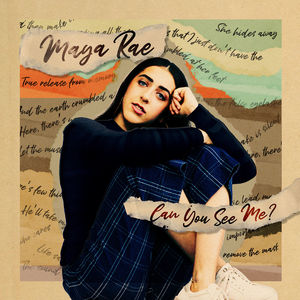 Can You See Me

Can You See Me?‘s title track is refreshingly jaunty musically, though anxiety runs through the lyrics: “I’ve been afraid of making changes,” Rae admits. Her voice varies between sultry lows and head voice highs.

I Get By keeps the upbeat air with an ode to the Autumn breeze recognized as preferable to the cold breeze from a toxic other.

The Sun Will Come Out Again is descriptive in evoking a young student’s emotionally fraught day and how she is soothed by comforting words from her mother. The same words are spoken by a young homeless musician’s benefactor, and a young woman determined to escape a violent home life to find a brighter future for her and her baby.

New For Me has jazzy elements as Rae interrogates how first love comes without a point of reference. Still, she’s defiant despite the pressure and won’t get worked up about the paradox: “everybody’s got all these questions that I just don’t have answers to, but who cares?”

Picture Frame is understated instrumentally as a stage for Rae to explore falsetto and run on sentences. It shouldn’t be a surprise that a 17 year old singer has such a range; she recorded her first album of jazz and pop standards at just 12.

Storm Leaf starts strong with a deliberate beat, horns and harmonies as Rae investigates the metaphor of a filing leaf to describe a failing relationship.

Freedom Fighter makes sense in the context of an album that uses similar phraseology and instrumentation as Mavis Staples’ work. This track picks up the blues element but it’s resolutely modern: “he smelt like oranges and Oreos.” In this case, freedom is more personal than political.

Mountain Angel is another profile piece. The vocal is soothing – powerful yet restrained – and the sense of respect is palpable.

Descriptive witnessing continues in Moon Girl, a vocally led track: “making love and taking drugs at an age that’s far too young to be healthy for anyone.” It’s rather reminiscent of Jason Mraz’ Love For A Child: “taking drugs and making love at far too young an age/and they never check to see my grades.” Given that Rae was around 6 when the latter song came out, it’s likely a sheer coincidence!

Lonely One sees Rae hitting a deeper register in a swinging jazz number. Then Goodnight River rumbles to life as ambient sounds ebb and flow. It’s a short and delicate lovely finger-picked piece.

The digital-only bonus track Here has pedal steel strains as Rae locates herself in both a literal and mythological sense of space and identity: “you will find me in Valhalla where my words are sharper than stone.”

This album showcases a young artist with an old soul and a secure sense of self, space and symbolism.

Can You See Me? was recorded by fellow Canadian Steve Dawson at his Nashville studio, Henhouse, with collaborators including Birds Of Chicago’s Allison Russell. Raye more than held her own, requiring just a single vocal retake in the five day session.