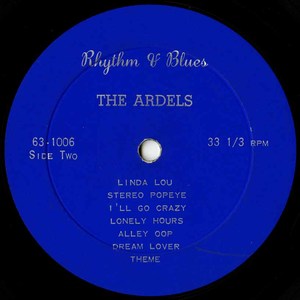 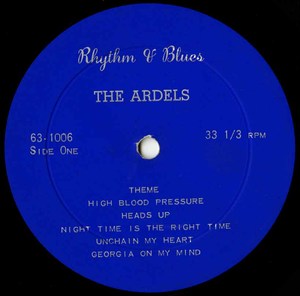 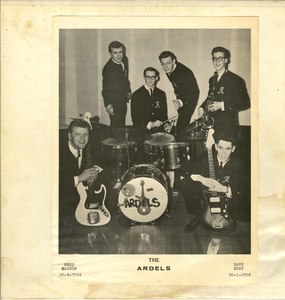 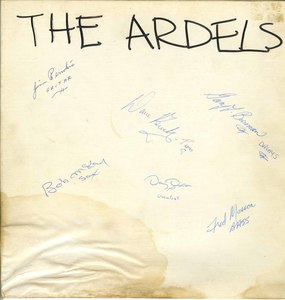 The Ardels formed in Etobicoke, just outside Toronto, in 1963. They released an album of rock n' roll standards of the day in 1964, then three 45s, one on Hallmark and two on Cancut, including what is now their most well-known work, Piece of Jewellery, an original by vocalist Doug Dixon. Fred Masson, bassist and founding member of the group took the time to answer my questions about the band.

The Ardels were originally formed when three of us: Dave Burt (piano), Robin Scott (guitar) and I met at a local church dance. I'm not sure that, at that point, we had any defining musical influences other than current pop tunes and early blues. Rather, as I remember, we were more influenced by the bands that were playing the local circuit. We came up at the same time as a bunch of local bands who were fairly busy copying one another and stealing licks and stage business that worked. As an example of that I can vividly remember playing a John Lee Hooker song in the style of a local band long before I actually heard the original.

After a few months of practicing we realized that none of us had the type of voice that would work as a front man and we recruited Bruce Saracini for the position. We also added Gary Brennan on drums at about the same time.

Over the first 6 months or so we probably played no more than 7 or 8 jobs, mostly local restaurants, house parties and a bunch of university frat parties.

We were competing in the neighborhood at the time with two very good garage bands, "The Checkmates" (later "John and Lee and the Checkmates") and The Lucernes (years later Doug, Russ and I would form "The Green Apple Quickstep" with Doug Duff, the horribly talented piano player from "The Lucernes") and realized that we needed a dynamic front man - leading us to Doug Dixon who lived in the neighborhood and had an unswerving drive to be a pop singer and composer. Doug joined us replacing Bruce and was responsible for writing almost all of the original Ardels material.

About the same time Robin Scott decided that he wanted to devote more time to his studies and we held open auditions for a new guitar player. Jim Pernokis, the brother of Ken, the guitar player for "Little Caesar and the Consuls" (which, over a few years, had included Robbie Robertson and Gene McLellan and was probably the most popular local/area group at the time) came to sit in for an hour and stayed around for about 40 years.

At the same time we recognized that we needed a horn in the group and recruited Bob McKay on tenor sax. Bob not only proved to be a terrific addition musically but also added a huge amount of charisma to the group. He can be heard on "Comin' Down".

As to the album, we had recorded about 12 songs at the Canadian Broadcasting Corporation (CBC) and had been given access to the master tapes. At that point we were playing regularly around Ontario and were getting requests for recorded material. Using the CBC masters we self-produced an album through Quality Records in Scarborough, Ontario so that we'd have promotional material to offer at dances - and to promoters. I think we only had about 500 of them to begin with!

The album leaned very heavily on standard rock songs of the period and borrowed heavily from Ronnie Hawkins (Lonely Hours) and James Brown (I Go Crazy) which showed off Doug's range.

About the same time we had been contacted by Bill Gilliland of ARC Records who had auditioned us at the Met Dance Hall in Toronto and was interested in looking at the group for the label. This brought about an ARC recording session which didn't result in a contract. Unfortunately the masters of that session have been lost.

A few weeks thereafter we went into Hallmark Studios in Toronto - a huge, cavernous room used at the time for large orchestral recording - to produce a single - primarily to impress Stan Klees and Walt Grealis who were becoming a force in Canadian music at the time, just starting to publish RPM, the music magazine (which, over the years, would morph into The Junos - Canada's national music awards) and Ron Scribner who ran Bigland Agencies - the only large and credible booking agency in the country. The session resulted in "Comin' Down" (a song written for Bobby Darin that had been rejected by Darin - or so we were told) and "So Glad You're Mine" [the Arthur 'Big Boy' Crudup song].

The first single was impressive enough to bring about the deal with Cancut Records and representation with Bigland.

The band played very few (if any) bars or night clubs at that time. There were, in fact, not many venues of that type available for young bands in Southern Ontario. The Toronto Strip - an area about 4 or 5 blocks long - had Le Coq D'Or, which was Ronnie Hawkins' (almost) permanent home; The Brown Derby booked larger national acts like Joe King and the Zaniacs; The Sapphire catered to a slightly more esoteric audience and regularly featured Jackie Shane backed by Frank (Duel Trumpet) Motley while The Zanzibar catered to a more blues-oriented audience and booked in groups like The Bossmen/Shays.

The rest of us played regularly at dance halls: The Mimicombo (a roller rink), The Met, Krang Plaza, Myzeric Hall, The Masonic Temple - along with the usual school, university and church dances.

Q. Did you play on the unreleased 45, Stronger Than Dirt b/w I Should Have Known? - Was that supposed to be for Cancut as well?

I'm not sure if I played on the unreleased version of "Stronger Than Dirt". It had been redone several times over the years but I'm almost certain that Roger played on the one that you're thinking of. And yes it, along with "I Should Have Known" (below) was (probably) going to be the next CanCut recording.

The band didn't so much break up as slowly slip away. Several of us left to pursue either job or educational opportunities and some were drawn to different types of music. We were very fortunate to have been a part of the Canadian music scene at what would become known as the first gasp for recognition.

I can remember having a discussion with Garth Hudson in front of The Met Dance Hall on Lakeshore Road in Toronto at about 1:30 in the morning bemoaning the fact that there weren't many opportunities for air-play (this was before the fabled days of CanCon, the government-mandated order for all Canadian radio stations to devote huge blocks of air time to Canadian talent. Check out the bios on Stan Klees and Walt Grealis for more on that). I seem to remember that Hudson managed to rise above the problem eventually.

Q. You were impressed by the Fireflies of Sault Ste. Marie when you were young - did you grow up in the Soo before moving to Etobicoke?

I lived in The Soo for about 5 years before my family moved to Etobicoke. There's no reason that Eddie Pelletier and Howard Hall of the Fireflies [from Sault Ste. Marie Ontario] would remember me but their music - or, more accurately, the fact that a bunch of kids from the Soo could actually produce some great music - was the first bit of inspiration I needed to get on that same track. I have great memories of those guys playing the "Y" dances (and still fondly remember Eddie's version of "Home").

Q. I've read that the Ardels backed David Clayton-Thomas on a tour, is that correct?

The Ardels didn't back Sonny Thomas at any time (at least not during my time) as he was associated with a very talented band - either The Bossmen or The Shays depending upon the time. A few of the guys in these bands - Freddy Keillor - guitar (sorry, I'm unsure of the spelling) and Tony Collicott - piano (listen to "Brainwashed" - Tony had 36 fingers.) were as good as anyone playing anywhere at the time.

The Ardels recorded a number of songs that have never been released. Along with Stronger Than Dirt and I Should Have Known, there is also an earlier version of Piece of Jewellery.

After the group broke up in 1968, Doug Dixon and Jim Pernokis joined The Bedtime Story, who had two 45s on Columbia.

David Burt has had a long career as solo pianist, teacher and writer. Gary Brennan passed away in 2007.

Thanks to Fred Masson for helping with material for this article and for patiently answering my questions, and to Ivan Amirault for contributing many of the photos and scans of RPM.

Correction! The version of Stronger than Dirt that I had listed as the unreleased A-side of I Should Have Known is actually by a Pennsylvania group called the Ardells (with two 'l's), and was released on the Thor label. I had wrongly assumed this was the Ontario group. Thank you to Ben Olins for pointing out my mistake. The post above has been corrected to reflect this new information. Updated April 12, 2008.

The version of Stronger than Dirt that I had listed as the unreleased A-side of I Should Have Known is actually by a Pennsylvania group called the Ardells (with two 'l's), and was released on the Thor label. I had wrongly assumed this was the Ontario group.
-Garage Hangover. www.garagehangover.com