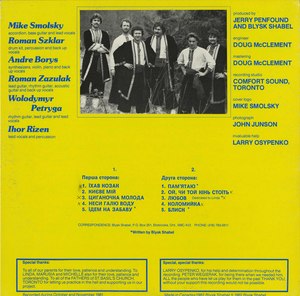 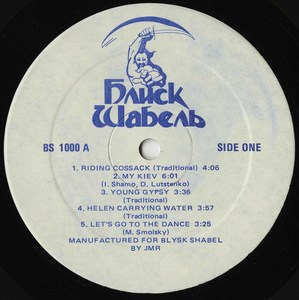 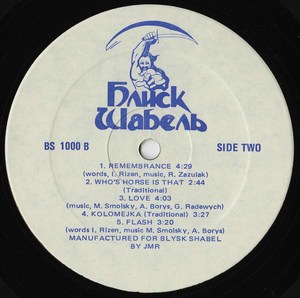 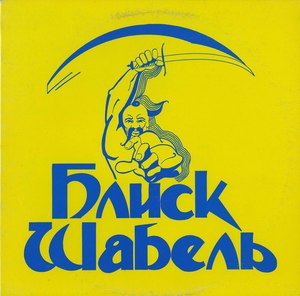 Blysk Shabel was a very popular Toronto zabava and wedding band from the early 1980s. As was the trend for zabava bands during the 1970s & '80s, "Blysk" mostly performed the standard, traditional Ukrainian melodies, but played them using the latest rock sounds, and instruments, of the day. They also included a few original, band-written songs in their musical mix - again, song's that basically followed that same formula (Traditional + Rock).

However, credit can be given to Blysk Shabel, because their album did feature a couple of songs that ventured as far away from the traditional 'rules' as any other contemporary zabava band would attempt at that time: "Їдем на забаву" (Let's Go to the Dance) & "Блиск" (Flash) are those numbers.

To enhance their appearance on stage, Blysk Shabel band members most often appeared at their gigs wearing Ukrainian embroidered costumes - a conscious nod to the influence that Montreal zabava bands Rushnychok and Samotsvit had on up-and-coming contemporary bands of the time.

Unfortunately, Blysk Shabel didn't exist for long, but they produced one very well-received album that fused together traditional Ukrainian melodies with some prog-rock prowess, good old-fashioned rock 'n' roll, and light humour! In many people's opinion, the album is still considered a Ukrainian-Canadian classic.

In their short time together, Blysk Shabel were well travelled and managed to play several functions in both Canada and the U.S.A. In a 1982 issue of Ukrainian Weekly newspaper, an advertisement for the upcoming Garden State Ukrainian Festival in New Jersey called the band "spectacular" - and the band did satisfy the fans there by playing to huge crowds at both the concert portion and the evening zabava.

Today, Blysk Shabel is fondly remembered by those who were fortunate to see, and hear, them perform.