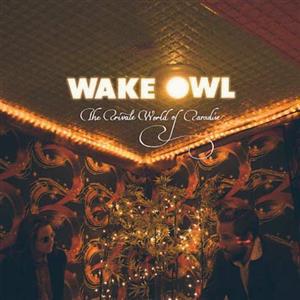 The Private World Of Paradise

Is it unfair to expect from a full-length debut what was promised on the EP? Wake Owl's Wild Country EP was a stunner, a fresh and flawless collection of build-and-sway arena-folk that was easily among the best EPs of 2013. The Vancouver/Portland band return with The Private World of Paradise exploring new territory and offering up a new sound. Apparently a lot can happen in a year, but the band inhabit the new space as if they've been there all along.

Wake Owl's core members, Colyn Cameron and Aiden Briscall, have teamed up with producer Richard Swift (the Shins, Foxygen, Damien Jurado, among others) and his influence is immediately felt. The new album features a stretched-out Wake Owl playing a smoother, genre-resistant '70s vibe. Whereas the Wild Country EP felt bigger, bordering on anthemic, The Private World of Paradise is atmospheric and experimental, though unobtrusively so, and less prone to abstraction.

Fans of Shins-style haze-folk will like what Wake Owl have done here and might even appreciate the deliberate absence of melancholic sweetness ("I fucked with your mind, silly girl," they sing on the strummy "Oh Baby") or hasty slides into hooky pop. Wake Owl swaggers ("Candy") and lilts ("Madness of Others") as well as anyone, but the goal here is to craft a retro soundscape, a darker, textured and contemplative one.

Cameron and Briscall should be commended for evolving and expanding their sound. Clearly, tacking a few extra songs onto the EP or replicating it would have been too easy for musicians with this much talent and ambition. The Private World of Paradise is certain to earn Wake Owl a legion of devotees among the late-night headphones crowd.
(Rezolute)

Singer/songwriter Colyn Cameron of Wake Owl has been immersed in the world of music for the past ten years. Now based in Vancouver, BC and Portland, OR, Colyn was originally born and raised in southern California.
After graduation Colyn trained in organic agriculture at Emerson College in England, worked on different farms throughout the UK, Germany, Chile and Canada and traveled the world. Upon returning from his travels, Colyn spent some time playing in bands before deciding to record the songs he had written after his journey, and thus began his first completed body of work, the Wild Country EP. Released in January of 2013, Wild Country was a five-song EP that served as a prelude to Wake Owl’s debut full-length, The Private World of Paradise.

The Private World of Paradise was recorded at National Freedom studios in Oregon with producer Richard Swift (The Shins, Foxygen). For the first time, we see Colyn writing and recording with a band. “Being 2 years since I first released the EP, this music represents a lot for me. It is a significant step forward in terms of songwriting and how Aiden (Briscall, multi-instrumentalist) and I approached the songs musically,” Colyn comments. “Once collaborating with Richard it all really began to take shape and I think all three of us were pleasantly surprised with the process. We all bonded sonically so much that recording the record was really an amazing experience.”

From start to finish The Private World of Paradise is effortlessly cohesive, telling stories of love, loss, and dreams. “ The title was a phrase that came to me one day and just stuck with me,” notes Colyn, “I wrote it down a lot and the more I thought about it the more I realized a lot of the songs on the album were me in some sort of paradisiacal imaginative state. In that moment of writing the songs I felt very isolated. It’s a very private world that is hard to share with people. It’s humorous to me because any kind of actual paradise is anything but private or limited to one person’s experience. I like that sort of juxtaposition and duality in the meaning. “

Songs like “Candy” perfectly demonstrate Wake Owl experimenting with different instrumentation, creating an upbeat atmospheric vibe found throughout the album. “There’s a lot more room in this batch of songs to explore live. This was a goal of ours from the outset of writing, trying to create space, so that live we could take people on more of a journey. The music is very visual for us, so there will be a strong visual element in the live set.”

The Private World of Paradise showcases Wake Owl’s departure from straightforward-acoustic-guitar-driven songs, highlighting the band’s poise and retro-rock mannerisms. The result is an eleven-track debut album that harvests playful experimentation and raw emotion in perfect harmony. The album will be made available nationwide on March 4, 2014.
-Matthew McKean