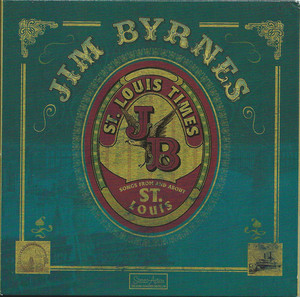 Jim Byrnes lives and breathes music. For nearly fifty years he's crooned, drawled, belted, hollered and sweet talked more songs into a microphone than most people ever get to hear in a single lifetime. He's vibrated the rafters of saloons, pool halls and dance floors from one end of the continent with more styles of music than you could shake a stick at. It doesn't matter whether it's low down blues, gospel, R&B, old time, swing, country or good old rock and roll – when Jim Byrnes sings, it's the real deal.

Even so, he's never recorded an album like this one. 'St. Louis Times' is Byrnes' most personal record to date. Reminiscences of his childhood home of St. Louis are expressed through his original compositions as well as versions of songs he grew up with that were recorded by St. Louis musicians. By revisiting songs associated with Chuck Berry, Stump Johnson, Little Milton, Peetie Wheatstraw and more, Jim Byrnes takes us on an intimate musical journey through a world that has passed by just in time for the commemoration of the 250th anniversary of the founding of the city of St. Louis and the 100th anniversary of the song 'St. Louis Blues.'

'St. Louis Times' is the sixth album that Jim Byrnes and Steve Dawson have recorded together and its release coincides with the tenth anniversary of their partnership. With that in mind, Dawson gathered some of the best roots musicians in Vancouver together for a super session to record the basic tracks for 'St. Louis Times' on vintage equipment in a big old studio blessed with brilliant ambience and acoustics. As usual Dawson's signature string work rides shotgun through 'St. Louis Times' and has never sounded more right for Jim's songs, while Darryl Havers' innovative keyboard work and the rock solid rhythm session of Jeremy Holmes on bass and the tireless Geoff Hicks on drums gracefully support every track. Horns from a host of legendary Nashville players provide depth and texture on many of 'St. Louis Times' best songs.

Jim's old friend John Hammond passed through Vancouver while 'St. Louis Times' was being recorded, which provided the perfect opportunity for the two veterans to duck into the studio and cement a forty year friendship in song. Hammond trades verses with Byrnes on 'Ducks Yas Yas Yas', offers some tasty National Steel on 'Cake Alley' – an ode to one of St. Louis' seedier neighbourhoods of yesteryear – and blows some serious harp on 'Evil' and 'I Believe That Was A Lie.' Not to be outdone, the Canadian blues icon, Colin James stepped up to play an acoustic solo on 'That Will Never Do' that may very well be the best thing he's ever recorded. No Sinner's Colleen Rennison also dropped by the session to belt and snarl her way through 'Miss Me' the old Fontella Bass and Bobby McLure hit that will surely be remembered as one of the finest performances on 'St. Louis Blues.'

As spot on as Byrnes' choice of classic songs from St. Louis' heyday is, the thing that many of his fans look forward to hearing the most on a new album are Jim's original tunes. He's outdone himself this time with his first foray into spoken word with the emotive 'The Journey Home' that takes his listeners through the sights and sounds of the bustling St. Louis of Jim Byrnes' childhood. The slow blues of 'Old Dog, New Tricks' with beautiful clarinet accents from Tom Colclough and the spiritually uplifting 'I Need A Change' prove once again that Byrnes is an artist with a lot of depth and a huge vocal palette while 'I Believe That Was A Lie' is as fine an homage to Jimmy Reed as anyone could ever hope to hear.

The 250th anniversary of the founding of St. Louis and ten years of partnership with Steve Dawson may have had been the original motivation for recording 'St. Louis Times', but the sheer joy you can hear in the music Jim Byrnes and company create is the real reason to celebrate. Jim Byrnes is a living musical treasure and 'St. Louis Times' is his best record yet. And, that's saying something.