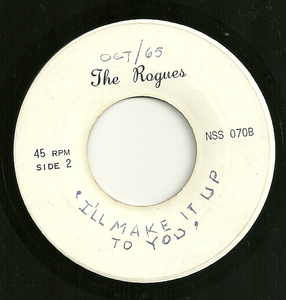 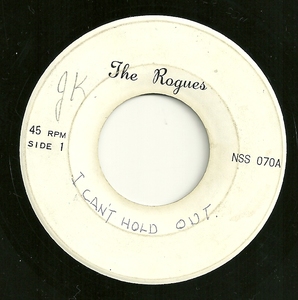 primitive garage swinger demo promo 45 by Toronto's 5 Rogues, pre Mandala. Less than a handful of copies exist. "I Can't Hold Out" has all the primitive garage feel that garage collectors are looking for: stinging guitar, whirling organ & snotty & pained punk vocals. The flip is a teen croner garage ballad. This demo shows the Toronto legends just cutting their teeth.

Mandala's origins can be traced back to The Rogues, the house band at the Club Bluenote in Toronto during the summer of 1964. Keyboard player Josef Chirowski (born on March 2, 1947 in Germany), bass player Don Elliot (born on December 8, 1944 in Toronto) and drummer Pentti "Whitey" Glan (born in Finland) had worked together previously in several outfits, most notably Whitey & The Roulettes, who also contained future Luke & The Apostles and McKenna Mendelson Mainline guitarist, Mike McKenna.

The band adopted the name The Rogues when singer George Olliver (born January 25, 1946 in Toronto) and former Robbie Lane & The Disciples guitarist Domenic Troiano (born Michaele Antonio, January 17, 1946 in Mondugno, Italy, naturalised Canadian in 1955) joined in 1965. For a very brief period at the end of 1965, future Blood, Sweat & Tears singer David Clayton-Thomas also augmented the line up after parting with his previous support band, The Shays.

In the spring of 1966, The Rogues (minus Clayton-Thomas) briefly became The Five Rogues and consolidated their local reputation with regular appearances on the city's vibrant club scene, playing at venues like the Hawk's Nest, the Club Mimicombo and the Gogue Inn.
One show at the Gogue Inn, advertised in the Toronto Telegram's "After Four" section for May 25, 1966, found the group opening for Wilson Pickett alongside another local group, R K & The Associates, who featured future Mandala singer Roy Kenner. During this hectic period, the band also performed throughout Ontario, appearing at notable venues like the Whitby Arena and the Jubilee Auditorium in Oshawa. Around this time, the group also recorded two tracks as demos - "I Can't Hold Out No Longer" and "I'll Make It Up To You".
Five Rogues become Mandala.

Markowitz envisioned the band as being a channel for the audience to release its emotions and the newly named outfit, decked in pinstripe, gangster-style suits and aided by strobe lights, returned to the Toronto scene in early October with its "Soul Crusade", which was met with mass hysteria.