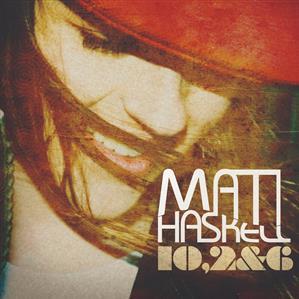 “It’s been a long time coming,” a line from the famous Sam Cooke song, and a sentiment Mati Haskell can relate to as her long awaited debut album “10, 2 & 6” comes to fruition.

The soulful, bluesy, rootsy, gospel, folk and jazz infused vocalist is on the cutting edge of the Americana-Triple A format, and on the edge of becoming a real breakthrough artist.

Her dynamic voice and passionate interpretation of song captivates an audience, and leaves many wondering how one, originally from the small town of Chatham, Ontario can embody the soul and grit of someone from a much harder place and time.

Maybe it’s because Mati has been inspired and influenced by a variety of Soul, Motown, Gospel and Roots music artists. Listening to their voices and learning with every note about heart, soul, pain, and joy, she draws inspiration from her musical heroes Mavis Staples, Etta James, Bonnie Raitt, Mike Farris and other eclectic artists whose roots run deep.

Also joining Mati is an incredible array of legendary singers including Americana/Bluegrass superstar John Cowan, Bekka Bramlett, Jonell Mosser and Gospel divas, the McCrary Sisters; Each musician adding their own, unique and authentic touch to the project.

"Here is a debut record beyond anything I’ve heard before...Mati Haskell pushes more boundaries than many would dare on their second or third record, let alone their first. This record is astounding!"
- Maverick Magazine UK

“So seductive, Mati's voice will send shivers of sensation down your spine, kind of like Joni Mitchell with a bit more soul and sass. From our friends across the border in Canada.”
- Independent Global Music

The album was produced in Nashville by the award winning JK Gulley with Mati alongside and Jason Lehning as head engineer.
The Gospel based, New Orleans flavoured track “Let’s Make A Baby King” from singer/songwriter, Jesse Winchester reached top five and top ten most played songs on Americana podcasts along side acts Joan Osborne, Bright Eyes, and Iron & Wine. It was also featured on Canada’s premier Jazz station FM 91 on Danny Mark’s “Bluz FM” program.

“I just love the 'Baby King' track. You did a really first class job - great vocal, great guitar, great sound. Thank you for doing one of my tunes.”
- Jesse Winchester

“I love the version of Blessing! It might be the best one yet”
-Johanna Hall

One of Mati’s most recent stage appearances was at the Kitchener Blues Festival opening for Dr. John, and receiving a standing ovation. She’s performed at the Uptown Waterloo Jazz Festival, Orangeville Blues & Jazz Festival, Collingwood's Blues at Blue Fest, Mariposa Folk Festival, Jeff Healey’s Roadhouse, Canadian Country Music Week, and various other clubs and theatres throughout Canada and the US.

“I absolutely love your singing and believe you have a bright future.”
- Danny Brooks

The Haskell voice has also appeared on several Canadian recordings, jingles, and is making waves on You Tube with her debut video “Nothin’ But The Blues.”