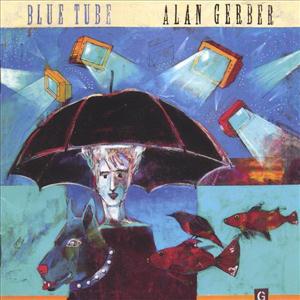 Blue Tube has a roots music feel from blues/folk to R&B funk/ gospel with lyrics ranging from poetic to comical.

Alan Gerber - Simply Outrageous
"Seeing Alan Gerber perform live is a joyous experience. You can tell he loves to be in front of an audience and truly whips them into frenzy. He's amazing!"
-Holger Peterson

Strap on your boogie-woogie shoes, hold on and get ready...Alan Gerber has arrived! . This eccentric entertainer is wowing audiences internationally. His amalgamation of boogie-woogie, stunning vocal interpretations and fine musicianship make Gerber an artist of the highest order. His show is exhilarating and captivates audiences of all demographics placing him in high demand to festivals, clubs and theaters nationally.

When Alan moved to Chicago to begin work for the "Let Us Entertain You" Network, he developed a one-man show to fulfill his need to create his own brand of music - blues, meets gospel, meets boogie-woogie. Gerber’s incredible energy and outrageous stage antics began to blossom and promptly, he established a faithful following.

In 1994, he produced and released "Chicken Walk". He followed that up with "Fools That Try" in 1997 and “The Boogie Man" in 1999. When demand for a live CD began to surface, Alan took the studio on the road and produced Alan Gerber Live in 2002. This CD captured his live performance energy and audiences and buyers were quick to stand up and take notice. “Alan Gerber Live” showcased Gerber in all areas of his art. He produced the recording, wrote and performed the songs, and played all instruments on this CD.His new CD, "Blue Tube" , promises to be the most exciting Alan Gerber release to date .Gerber is poised and ready for international success.

Alan's professional career began when he entered a music program at Roosevelt University in 1965. Producer Paul Rothchild (The Doors, Paul Butterfield, Janis Joplin...) discovered Alan's talent and soon he was a singer, songwriter and keyboardist for a group to become known as Rhinoceros. The release of two albums on the Elektra label brought Rhinoceros to tour North America with such names as Janis Joplin, BB King, Jefferson Airplane, Traffic, Jimi Hendrix, Steppenwolf, John Lee Hooker, Jeff Beck and others.

Alan left Rhinoceros and released his first solo effort in 1971 with Shelter Records and the worldwide distribution of this recording earned him a tour with Leon Russell. In 1974 the release of the single "Tied On" (produced by André Perry) went to number one on Québec radio and Alan toured the province in the wake of its success. Gerber placed two songs on the soundtrack of Bob Dylan's movie "Renaldo and Clara", performed at Bob Dylan’s Rolling Thunder Revue and toured with Lou Reed in the United States.

Alan Gerber - songwriter, vocalist, musician, producer, comic, actor. He is an enigma...can there really be that much talent in one man?
"Since the 28 years of the Blue Skies Music Festival, I haven't ever seen the crowd boogie like they did tonight with Alan Gerber and his band. I knew it was going to be good, but I never even imagined it this good!"
-Al Rankin, talent coordinator, Blue Skies Music