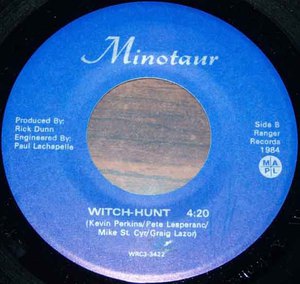 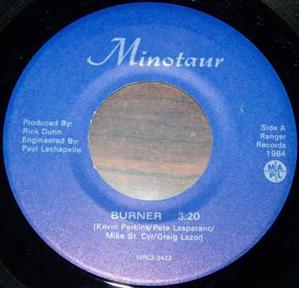 Minotaur was formed in 1982, in a garage in Oshawa, Ontario, a suburb of Toronto. Between 1982 and 1987, the band travelled extensively throughout Central Canada and Quebec, playing clubs and arenas with legendary Canadian acts like Anvil, Kraken, Lee Aaron, Kim Mitchell and the Killer Dwarfs.

1982 was the year that I experienced my first big metal show in June- Iron Maiden with Anvil, on the Number of the Beast tour. As a 13 year old kid, growing up in an industrial city- the motor city of Canada- headbangers were a rare breed. When I arrived at the venue on the night of the Maiden show, I was blown away to find that every single person waiting in line to get in was clad in leather and studs- I mean you could literally smell the leather surrounding you and I nearly lost my mind. At one point, everyone began chanting United- the Judas Priest anthem- in unison. These were the brothers I never had- the underground true-blue metal fans that were like me- on a pilgrimage to a show that changed my young life.

That night pointed me towards an outlet for my rage, creativity, and lust. And ultimately, it probably saved me from the self-destructive fate that many of my not-so-advantaged peers had in store for them.

HEAVY METAL WAS NOT A FAD TO US; IT BECAME A WAY OF LIFE!

In an awesome twist of fate, 3 years later we were opening for Anvil at the El Mocambo in Toronto, when Steve Harris and Adrian Smith walked in and sat down right in front of us in the middle of our set. They had flown up from the Bahamas, to promote a line of Canadian guitars that they endorsed, and were taking a break from recording Piece of Mind. Pete and I gaped wide-mouthed at each other in utter disbelief!!! Here was Iron Maiden, watching us 15 year olds play Iron Maiden songs. I nearly pissed myself later when Steve Harris told me backstage over a beer ” you sound a lot like Paul Dianno, mate” (Maiden’s first singer).

In the end, the band went their separate ways, with guitarist Pete Lesperance moving on to join Harem Scarem in 1988. Pete became a guitar hero to fans around the world, and is known today for his playing on the many records he has recorded with Harem Scarem and songs he has written and produced for many other projects.