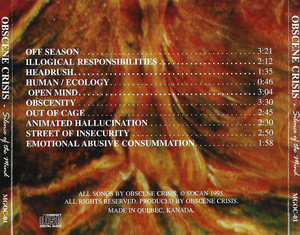 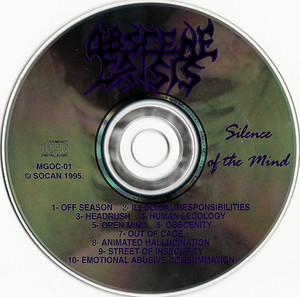 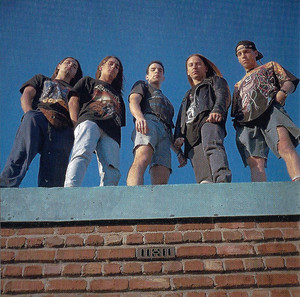 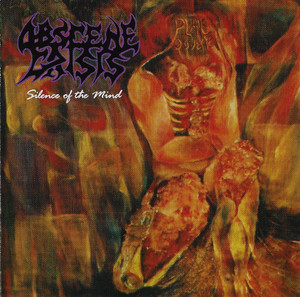 Silence of the Mind

Succinctly put, this demo gives the listener a 25-minute barrage of chainsaw guitars. I half expected a generic offering of bland death metal, despite being quite impressed with their live set, opening for Suffocation in London, Ontario. Luckily for me, Obscene Crisis deliver the goods with this independently produced CD.

The twin guitars of brothers Stephane and Jean-Pierre Cote shred, combining a heavy speed metal influence with death metal structures. Granted, it took me awhile to really learn to appreciate their music, but after repeated listenings, I was floored. The rhythms are complex, and the musicians are of high enough caliber to pull everything off beautifully. While their sound most closely resembles the North American death genre, there's a subtle sense of melody that just creeps up on you once you've familiarized yourself with the songs, keeping you coming back for more.

Of course, there's the occasional sloppy moment, and the very mildly muddy production, but this is one damn fine listen. Eric Fiset's vocals vary from gurgling death growls to high grind screams, both occasionally multi-tracked together, offering both extremes simultaneously. And lo and behold, I can actually hear the *bassist* (Chrystian Boyer) running interesting lines throughout the tracks.

I was particularly impressed by the drummer's live performance; Stephane Chartrand does not disappoint in the studio, as the flurry of rolls and double-bass clearly show.

Montreal just seems to consistently ooze quality metal, and Obscene Crisis are further proof of this. Given more time in the studio and a bigger budget, they could very easily, in my opinion, become major contenders in metal realms. Already garnering acclaim in Europe, according to the band, this is one group to keep an eye and ear out for. Do yourself a favour and seek out a copy of this mini-album.
-Alain M. Gaudrault