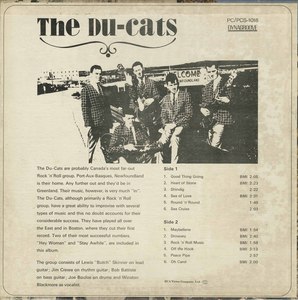 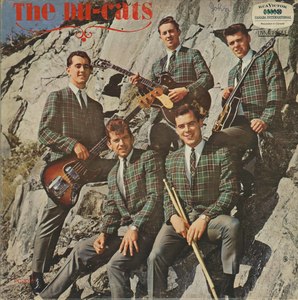 In 1965, The Du-Cats recorded the second rock and roll album by a Newfoundlander (first were The Keatniks: http://mocm.ca/Music/Title.aspx?TitleId=285606). Nicknamed "The Tartan Album" (the band members wore the Newfoundland Tartan blazers), the album had two different pressings, with two different covers. The first pressing was a mono pressing on RCA PC-1018. It had ""Hey Woman" and "Stay Awhile", are included in this album" written on the back (although the album did not have these tracks on it). The second pressing was stereo and was released on RCA PCS 1018. Although they both shared the same photo, the second pressing was zoomed in a bit further. It is not known how many of these were pressed, probably 500 of each. A Near Mint copy sells for $300-400.