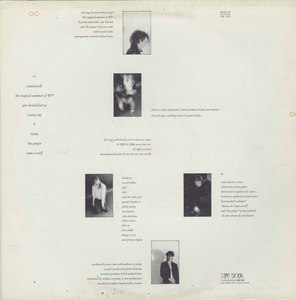 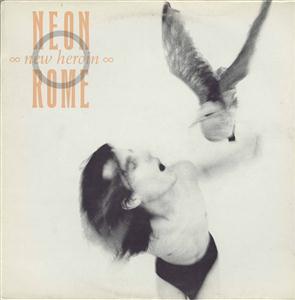 I played my first bar in the spring of 1982 at Toronto's Turning Point. I had just turned 16. In the fall of that year I quit school deciding to pursue music as my chosen profession. In early 1984 I was one of the founding members and bass player for a new band called A Neon Rome. Led by front man Neal Arbic who was like a cross between Iggy Pop, Patti Smith and Jim Morrison, our shows were usually chaotic events where stages were decorated, microphones were swung, beer bottles were broken, audiences were taunted and various forms of mayhem would ensue. More than once a soundman came up to me and said "You guys are really lucky I enjoyed that so much otherwise I'd be pounding the crap out of that guy right now". Neal also put on an incredible poster/spray paint campaign that I've not seen paralleled since and we quickly garnered a following in the Toronto area. This attracted a would-be manager who financed our first record New Heroin.

Released in 1987 on France's New Rose Records and a few months later in Canada on Elliot Leftko's Right Side Records New Heroin received rave reviews in the English and Canadian presses. We should have gone to Europe and capitalized on it all but by that time we had parted ways with our manager and were ready to make another record. We spent the next year and a half recording a second album to be titled All The Children Are In.

During this time Bruce Macdonald, who went on to make the movies Highway 61 and Hard Core Logo, approached us about being the subjects for his first film, a semi-documentary that would also be titled All The Children Are In. By now, Neal was practicing his own brand of Buddhism and had taken to eating nothing but almonds and raisons and, with the exception of singing, he was going for long periods of time without speaking. Our drummer, a character named Dogface was 15 years our senior, lived in a giant warehouse space (part of which would later become The Gas Station recording studio) and would go for months and months without bathing or wearing shoes. He was the one who brought in Tootsie, a former mental patient in his fifties who played various found and homemade percussive instruments and carried around everything he owned in number of homemade bags. The concept of the movie was to follow this urban freak show, documentary style, on a tour of Northern Ontario, where the only kind of live music the locals were used to seeing was a cover band doing a six nighter at the local tavern or a "Where are they now?" band playing at the local hockey arena. This would be combined with a loose story written by Don Macellar involving a couple of fictional characters.

In early 1989 our second record was done and the movie was ready to go into production. By then our old manager was working for Bruce, our soundman and drummer (who were kind of like our new managers) had grown at odds with both of them and Neal, who seemed to be disappearing before our eyes was no longer a guy who wanted to front a rock and roll band. We ended it there without releasing the second record and Bruce turned the movie into a fictional tale called Roadkill launching a very successful career for him.

In the spring of 2004 A Neon Rome unexpectedly reformed for a gig at The Bovine Sex Club in downtown Toronto. Much fun was had by all and we hope to play more in the future.