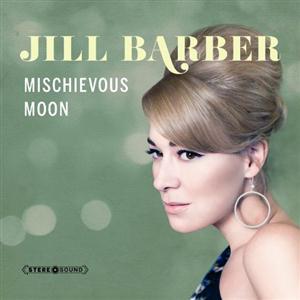 When it comes to describing Jill Barber, words like timeless, elegant and classic have become commonplace. Her dynamic shift to that of a 50′s era, sultry front woman not only perfectly suited her voice but helped her reach out to the all too often ignored vintage romantics. It also wooed critics all over the world. Chances used stitch perfect orchestration to support her charming voice perfectly and the pushed Barber to the top of the list of talented Canadian female singers.

The last three years have been busy for Barber; she got married, toured relentlessly and penned her first book, but only in the last year did she and Les Cooper collaborate and finish Mischievous Moon. Undoubtedly, Barber could have written Chances II or released a collection of steamy standards – if the music world will take record after record of covers from Rod Stewart, we would certainly permit the lovable Barber such an indulgence – but time and love have changed Barber’s outlook and she wanted this collection of songs to reflect that.

The biggest change is how Barber and her band interact. Barber’s voice still shines, but now it floats along waves of sweeping strings, horns, harmonies and percussion. The cohesiveness and musical understanding she’s developed with her band helps Barber frame tales of lust and longing and show a playfulness that wasn’t evident on her prior efforts. “Any Fool Can Fall in Love” hints at a Canadian take on Jobim’s most famous song, but Barber and her band let the melody grow into a smile filled sing-along that will trigger toe taps and finger snaps. “Took Me By Surprise” finds Barber and her band experimenting with tempo just as successfully.

What makes Mischievous Moon work is that while Barber pushes herself and her band, she never abandons the voice that made Chances so successful. The title track uses strings, subtle guitar and keys to create a magical moonlit night, but the backing players never crowds Barber’s voice. She doesn’t need lush orchestration – “If It Weren’t For Loving You” and “Lullaby” are simple in construction, and just as engaging as any of the bolder arrangements – and the band seems to instinctively know when to retreat and let her voice smolder. And smolder it does; just listen to the lead single,”Tell Me” (also sung in French for her francophone fans), and feel your temperature start to rise.
-herohill