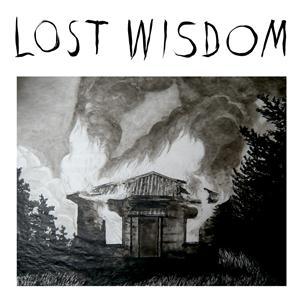 At a glance, a Phil Elverum/Julie Doiron meet-up seems entirely apt, perhaps even inevitable. The two share collaborators, hail from sleepy corners of their respective countries, and make music a Last.fm or Pandora bot would more than likely peg as "similar." Viewed a certain way, however, the two couldn't be more far afield. Elverum, as a songwriter, has long occupied himself with The Big Questions, his catalog full of probing meditations on birth and death, the elements, and the unknown. Doiron, conversely, has consistently stuck to the simple and domestic, quietly reveling in the tangible and everyday. Songs such as "Snowfalls in November" are patiently observed odes to satisfaction and serenity in the absolute. In short, Doiron is the contented period to Elverum's searching question mark.

The mini-album Lost Wisdom represents an intersection of those two distinct sensibilities and their resulting voices: Elverum, his tone often hesitant and sorrowful; Doiron, her singing reassuringly direct and familiar. For Doiron, this is a chance to wrap her warm, homespun vocals around Elverum's words of uncertainty, bringing earthly color to songs which, under the Mount Eerie banner alone, might emerge cold and gray. From her entrance on opening track "Lost Wisdom", a stately rumination rife with natural imagery which sets the tone for the album, through her solitary vocal on the Songs-era Leonard Cohen-evoking "If We Knew...", and on to the closing duet "Grave Robbers", Doiron is a reassuring presence in song-world often threatening to capitulate to doubt.

Indeed, it's this presence of a second voice that distinguishes Lost Wisdom amid the abundance of post-Microphones Phil Elverum material. To hear Elverum sing of his existential quandaries in isolation is frequently compelling, but with these songs often cast as duets, we're presented with the notion that Phil's struggles are universal. Nowhere is this better demonstrated than on "Voice in Headphones", the closest thing to a standout track on Lost Wisdom, with its harmonized refrain-- borrowed from Björk's "Undo"-- of "It's not meant to be a strife/ It's not meant to be a struggle uphill." It's the sort of lyric Elverum would have the whole crowd singing along to at a show, and here-- surrounded as it is by plenty of brooding restraint-- it sounds resoundingly triumphant, a more terrestrial counterpart to the otherworldly song it quotes and a kind of modern day spiritual for those oppressed within.

Elverum, too, benefits from the de facto constraints of this collaboration. The album was recorded during a brief touring respite, forcing him to forgo the intricate (if still lo-fi) ornamentation that typically adorns his output. It is instead, as he told Pitchfork, a "documentary of a session." Even Fred Squire's electric guitar is notably unobtrusive as it complements the two voices and the steady rumble of Phil's acoustic. The result is a collection of songs so taut and concisely resonant as to be psalms. But psalms to be sung, perhaps, in secret: "Grave Robbers", the closing track, ends with someone abruptly shutting off the tape. In a way we're made to feel as though we've been eavesdropping all the while, but even so, seldom has an act of auditory voyeurism been so rewarding.
-Matthew Solarski, pitchfork

On his second album It Was Hot, We Stayed in the Water, the Microphones Phil Elverum recorded a cover of Eric’s Trip’s "Sand," paying homage to one of his favorite bands. Eric’s Trip was, by nature, hard to pin down, incorporating harsh, industrial-strength feedback, aggressively lo-fi production and bubblegum pop melodies in a volatile mix of sounds. After the band broke up, bassist Julie Doiron went the solo route, both under her own name and as Broken Girl, often exploring a delicate, acoustic, obliquely confessional aesthetic not too far removed from Elverum’s own. On Lost Wisdom, the two work together for the first time, with Doiron singing 10 Elverum songs.

Elverum and Doiron both have a knack for absolute simplicity. Lost Wisdom is not a long album – clocking in at just under 25 minutes – nor is it especially elaborate. Most of the songs rely on voice and guitar alone to make their case. And yet, how splendid they are, layered and looped in madrigals rounds and descants ("Voice in Headphones") or nakedly unadorned ("Flaming Home").

Still, no matter how lush or spare the vocal arrangements become, the voices themselves remain clear and simple. Elverum and Doiron often join in very tight, mildly dissonant, minor harmonies, the timbres of their two voices melding into one flickering tone. There is no vibrato, no growls or shrieks, almost no dynamic variation. If you had to pick an instrument to approximate their singing, it would have to be the recorder, blown softly and melancholically, without trills or flourishes. By shunning all vocal tricks, Elverum and Doiron arrive at a purity that is in no way dumbed down.

Doiron has brought along guitar player Fred Squire for the sessions, and he, too, hits an almost mystical level of simplicity. Consider, for instance, "Oh My Heart,” the penultimate song, where a series of splayed chords mutate into surreal, blues-tinged guitar picking. The playing is luminous and sustained, its notes left to twist and change in the air. Squire manages to sound as radiant as Hisato Higuchi or even Loren Mazzacane Connors without ever overshadowing the singers.

The production is minimal, as well. In the quiet between the songs, you can always hear the hiss of tape (which I notice because it disappears during the iTunes-artificial break between cuts). But still, this rough-hewn-ness is anything but limiting. The parts are eeriely clear and distinct. There is a sense of air and space in the mix, as well as natural life. It is as if these songs had been recorded in some rustic ruined cathedral, with moss growing between the stones.

Elverum wrote all these songs, some specifically for the record and others earlier, and his lyrics have the same pristine, unpremediated grace as the music. "What I find will be found easily / and only when I’m not looking for it," he sings, in close tandem with Doiron in "Oh My Heart." It is a lovely, unfussy, unslaved-over line in an album that is full of them, a testament to being in tune with your muse.
-Jennifer Kelly