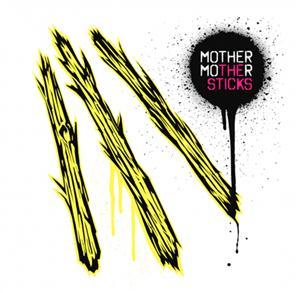 The five-piece Vancouver-based alternative noise pop band known as Mother Mother has returned with their fourth record. Over the years their reputation has continually grown with each successive release. With the release of The Sticks, that reputation looks to grow even bigger.

Starting off with the intro “Omen,” the whole album takes a dark turn while managing to stay menacing and creepy yet hopeful at the same time. The title track is very interesting, almost dirge like that sounds tailor made for rock radio or appearing on some hip blog. The band is very aware of what they can do, and while they’re willing to experiment and try some different stuff, they mostly stick to what they know.

One thing that definitely stands out on this record is the vocal interplay between guitarist and leader/producer/main songwriter Ryan Guldemond, synth player Molly Guldemond and keyboardist Jasmin Parker. The way the three weave and interconnect is an interesting thing indeed, sometimes sounding Silversun Pickups but with a higher vocal register. The first single, “Let’s Fall in Love” is a perfect example of this.

The band encounters a few bumps in the road and they’re extremely noticeable, particularly “Businessman,” which never seems to go anywhere and is probably the least interesting track here. Fortunately, there are enough stronger moments to make up for the weaker ones. Immediately following “Businessman” is “Dread in My Heart” which comes across like a little folk detour through the village of noise and harmonies. It works to counterbalance the rest of the material and is pleasant on the ears.

“Infinitesimal” is also a bit strange, but continually picks up steam. Further on, the album becomes more extreme: “Happy,” while being a good song is another dirge-like track that sounds just a bit out of place yet it’s part of the crowd, given the way popular and even indie music has been going lately, the stranger something is the more it seems to work. So if Mother Mother is able to keep up with the changing tides and their ever evolving musical personality, then we should hear them around for quite a while.

“Bit by Bit” is without a doubt the best track on the record. It contains fantastic vocals and a good beat that sounds like mid ‘90s industrial thrown into a blender with smiley pop from the sixties; that’s another good thing about this band; they seemingly love wearing their influences on their sleeves. On the other end of the spectrum, “Latter Days” sounds like a rock song that would be great on indie radio. For me, it’s rare to hear a lot of newer bands with so many songs that seem so radio friendly.

“Little Pistol” is one of the more intriguing tracks and better tracks; very slow, full of strings and cellos, and just a little on the eerie side. “Love it Dissipates” is probably the second strongest track on the record as an acoustic number with weird and eerie sounds. The band definitely knows its way around strange and creepy, but they do it so well you almost forget it’s strange.

“Waiting for the End of the World” is epic and one of the strongest tracks on the album. The shifting of the sound and the fierceness of the vocals make it one song to listen to repeatedly. Unfortunately, the closing track, “To the Wild” is the weakest link and would’ve worked better somewhere towards the middle of the record or as a b-side. In the end, the band was able to bring some new things to the table and made some good songs.
-Pete Crigler, Lithium Magazine